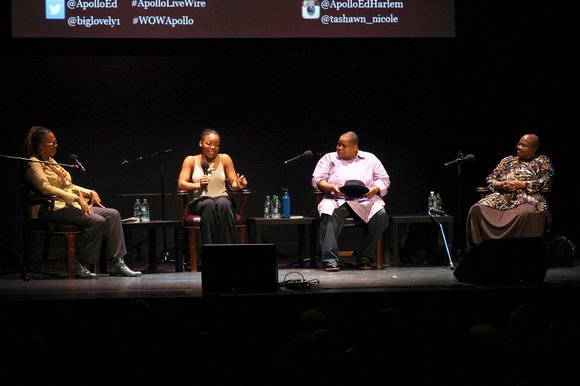 Who ran Harlem? At least for this past weekend, women did. The Women of the World Festival was in full force Thursday, June 11 through Sunday, June 14, with various events held at the legendary Apollo Theater, the City College of New York and participating eateries.

The festival, in its first year in New York City, was held to showcase the achievement of women who thrive in many different fields as they discuss their struggles pertaining to gender inequality, sex, race and feminism.

The Women of the World Festival kicked off with an intimate, acoustic performance by singer and activist Bernice Johnson Reagon and her daughter, composer and producer Toshi Reagon.

The two later engaged in a panel with the youngest of the Reagon family, Tashawn Reagon, who is currently attending Skidmore College and is also an activist. They discussed issues pertaining to racism, police brutality and combating injustice. Tashawn Reagon mentioned that the root of her strength and confidence comes from her mother and grandmother, who inspire her to engage in activism.

“I think the best lessons that I’ve have always come from women, continue to come from women,” she said. “If we have more spaces that support women and actually uplift them and not continue to degrade them, I think we all would benefit from it, men and women.”

Friday morning, adolescent and young adult females got the opportunity to sit on the “Girls Town Hall” panel, where they heard several females in their age range speak on various issues, including body image, self-esteem and sexism. The panel was hosted by Angela Simmons, daughter of Rev Run of Run-DMC, and Seventeen magazine Editor-in-Chief Michelle Tan moderated the panel.

The City College of New York President Lisa Staiano-Coico gave a speech detailing her experiences with sexism while growing up. She mentioned that when she was a child, it was very uncommon for females to show interest in anything related to science. It was her second-grade teacher, Ms. Dickinson, who laid the foundation for her to eventually become a scientist.

“She gave me a book on rocks and minerals, which wasn’t a book you gave to girls in the 1960s,” she said in her speech.

Ginelle Winter, a teacher from Summit High School in Red Hook, Brooklyn, attended “Girls Town Hall” with a few students from her class because she thought it was a good way to end the school year. One of her students, Felicity Ford, 16, particularly enjoyed the panel.

“I think it was informative,” Ford said. “There were many girls our age that we could connect with.”

Sunday brought a different perspective to the festival, as the men got the opportunity to speak in a panel titled “Reimagining Manhood.” The hour-long panel discussed roles males have in society today and the changes that need to happen among males to promote gender equality.

Tony Peralta, an artist from neighboring Washington Heights, spoke at the panel and mentioned that because he grew up around Dominican women, he feels he has a responsibility to showcase it and inspire others through his artwork. One of his latest pieces includes iconic Latin women, such as artist Frida Khalo, and putting them in hair rollers. He mentions that he did this purposely so that females in the Latina community can connect with and be empowered by the message he is conveying.

“When they see my work, they see themselves,” he said during the panel.

Saturday, the Women of the World Festival turned into a full-on music festival, as several artists performed at the Apollo. “Black Women Rock!” lived up to its name, from Nik West masterfully slapping the bass to Tamar-kali delivering rock to an audience anticipating R&B and soul. Grammy Award winner Macy Gray provided a special hour-long set that included a cover of Radiohead’s “Creep,” the soothing, soulful love track “First Time” from her latest album, “The Way,” and her biggest hit to close out the night, “I Try,” the audience hanging on to every word.