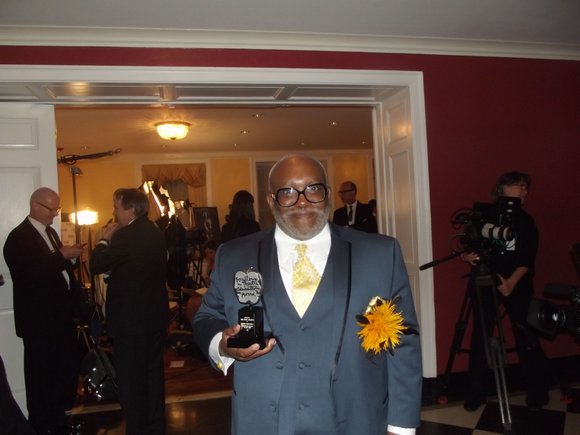 Corey Mitchell, the history-making winner of the first Tony Award for Excellent in Theatre Education. Photo by Linda Armstrong

History was made this year at the 69th annual Tony Awards, held at Radio City Music Hall, as the inaugural Tony for Excellence in Theatre Education was awarded. This special honor recognizes a K-12 theater educator in the U.S. who has demonstrated a monumental impact on the lives of students and who embodies the highest standards of the profession. The award was given by the Tony Awards and Carnegie Mellon University’s School of Drama to African-American Corey Mitchell. Mitchell is the theater arts teacher at Northwest School of the Arts in Charlotte, N.C. He teaches acting and musical theater at the magnet school.

Some of the productions his students have performed include “Pippin,” “Aida,” “Rent,” Hair” and “For Colored Girls.” During his 14 years with the school, over 70 productions have been presented. Mitchell’s students range from sixth- to 12th-graders and go through four levels of theater classes.

Mitchell is amazingly qualified to teach the next generation. He is a North Carolina native, educated at the University of North Carolina at Wilmington. All total, he has been a classroom teacher for 20 years. When he’s not in the classroom at the magnet school, he is a director and actor with community theater in Charlotte. He is also a member of the board of directors for the North Carolina Theater Conference. He also won the 2007 North Carolina Outstanding Theatre Arts Educator Award.

Mitchell, his colleagues and students are the focus of a 2015 feature-length documentary film called “Purple Dreams,” which will show the journey students took as they prepared and performed “The Color Purple” at the International Thespian Festival. Thousands of Mitchell’s former students are in the industry, performing, writing and composing for community, university, regional and Broadway theater, as well as working on London’s West End.

Speaking with the AmNews, Mitchell said, “One of my 12th-grade students is playing Kim in ‘Miss Saigon’ in London’s West End. They plucked her directly from my school last year in January. They started her in rehearsals for ‘Miss Saigon.’ One student whose dad is in prison and never saw him perform is at the University of North Carolina School of the Arts.”

Mitchell added, “Theater is an escape for these kids.”

He shared that his school is located in one of the poorest neighborhoods in Charlotte, and there were two shootings just last week. Discussing his students, he said, “Kids run the gamut—I’ve had students whose parents were murdered, I’ve had homeless students. You take the kids in and nurture them. Theater connects to everything. It teaches you skills you can take with you forever. Theater is life! We have a responsibility as artists to hold up a mirror on our society and show the silliness and the folly.”

The musical theater program has 124 students. “I try to make them into triple threats,” he says.

Mitchell, one of 4,000 candidates, was nominated by former student, James Kennedy. Kennedy went on to graduate from Emerson College and is about to do a one-year residency with a theater. “I’ve known Mr. Mitchell for 15 years, and he helped me to see what I really wanted to do and why I wanted to do it. To have his sensitivity, awareness and his dedication, we’ve gone from teacher-student to mentor-mentee. I talk to him every week for advice.”

Thank God for Mitchell and the work he is doing. It’s so important to help the youth, and he is obviously doing that while sharing his passion for the arts and inspiring a generation.