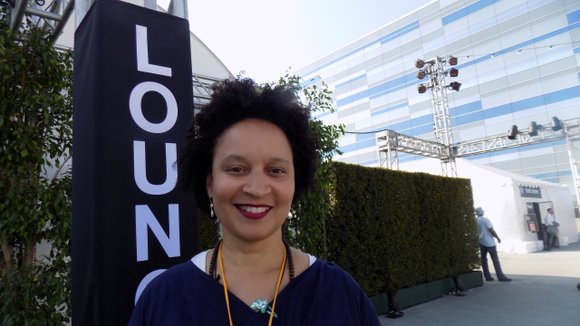 LA Film Fest Director Stephanie Allain gives credit where credit is due, fully acknowledging the strength of her programming team Roya Rastegar and Jennifer Cochis, who curated an “energetic slate of films from around the world,” which includes 45 world premieres and over 55 first-time directors. In short, their team has kept their promise to keep Film Independent’s mission of “diversity, innovation and uniqueness of vision.”

For creatives in Los Angeles, the stakes are high. One day you’re a struggling artist checking your EBT status, and a few months later, you’re signing a six-figure contract and getting toasted by industry heavyweights.

In reviewing the 58-page booklet of events, we realized that the opportunity to connect with industry influencers and exciting storytellers were unlike anything we experienced before. On day one, at the Rooftop Filmmakers Lounge, sponsored by LA Live, I received a warm hug from film producer Effie T. Brown, who had just returned from screening her award-winning film “Dear White People” in Israel. The vibrant creative was sharing humorous stories and interesting insight on the issue of diversity that she experienced during the filming of HBO’s revival of “Project Greenlight.”

In the reality show, she is the producer and mentor to the winner of the filmmaking competition. The series, produced by Matt Damon and Ben Affleck and Adaptive Studios, is targeted to premiere later this year.

“I told Matt and Ben to expect my film crew to be the very definition of diversity,” shared Brown. “That means LGBT, Asian, Hispanic, Latino and women—a lot of women in roles that have traditionally been performed by men. Diversity is too restrictive a word. Inclusion is a better word, and that’s what HBO’s ‘Project Greenlight’ got with me, inclusion. ”

The signature events—the opening and closing galas, Grammy performances, master classes and tributes—are under the curatorial prowess of Film Independent curator Elvis Mitchell. His encyclopedic knowledge of film compels “even the most reticent artists to reveal their creative process, resulting in a one-of-a-kind experience,” stated Allain.

It could not have happened smoother if we had scripted it ourselves. High above the city, we were just hanging with Mitchell and listening to him compare notes with Brown about her role as moderator for the “Women Make It Happen: A Celebration of Producers” panel with panelists Nina Yang Bongiovi (“Dope”), Dede Gardner (“Selma”), Gale Ann Hurd (“Walking Dead”) and Nina Jacobson (“The Hunger Games”).

“I want any of these women to help me make an ‘action plan,’” said Brown, joking. “I want a career like Gale Ann Hurd. How do I make that transition?”

Mitchell’s quick-witted quip was “off the record” but funny to the bone and chillingly insightful.

One of the best things about sitting with savvy artists is being introduced to their equally gifted colleagues. To wit, earlier that day, Allain asked me if I knew filmmaker-producer Daphne McWilliams. “If not, you should,” said Allain. “Her documentary ‘In a Perfect World’ is screening here and you should know her.”

The answer for us was “yes.” We had just spent a solid hour chatting with the filmmaker.

“‘In a Perfect World’ is an exploration of men who have been raised by single mothers and how it impacts their lives and future decisions,” said McWilliams. “I grew up in a ‘traditional’ home with a loving mother, father and siblings, yet nothing prepared me for the challenges I would face having to raise my own son Chase, from the age of 2, largely without participation from his father. Inspired by my own experiences, I set out to document an examination of my son’s maturation process, as well as present a sociological overview of what it is like to be a man raised solely by one’s mother.”