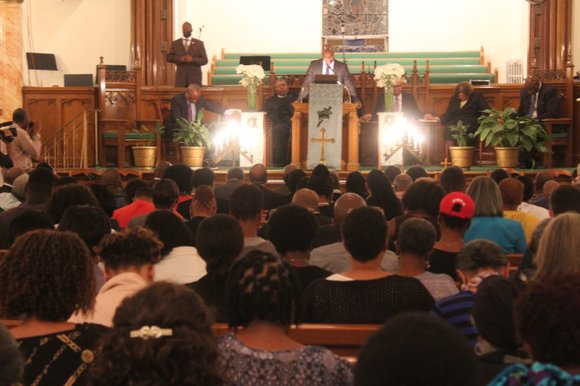 Hundreds packed the First African Methodist Episcopal Bethel church in Harlem Wednesday night to memorialize the nine people who were gundown during a Bible study session at a prominent historical black church in Charleston, South Carolina.

Standing shoulder to shoulder, mourners joined in the solemn singing of the hymns, “My Hope Is Built” and “Great Is Thy Faithfulness,” as ministers spoke about the “senseless tragedy.” They offered prayers of “comfort and healing” for the Charleston community.

“It’s horrific and unbelievable that people praying and learning about God, and someone was there planning to kill them,” Rev. Henry Belin III, pastor of the church, told the AmNews after vigil. “When I heard about it, I said something has to be done to honor and memorialize the victims.”

Rev. Belin III, who’s been pastoring the church for 13 years, said he personally know three of the victims including Rev. Clementa Pinckney, pastor of the Emanuel African Methodist Episcopal Church, where the shooting occurred. He described him as a “first class guy.”

“A straight shooter, well respected and a class of a gentleman. An excellent pastor he was, and he loves people,” he added.

The massacre at the almost 200-year-old Emanuel AME Church, which occurred Wednesday night, comes after a year of turmoil and protests about police brutality against unarmed African-American and criminal justice reform.

The victims, six women and three men, all of whom are black, were gunned down by Dylann Roof, a 21-year-old white man. The oldest victim was 87 years old, the youngest 26. Four of them were reverends.

Police said Roof entered the church and sat with the group during the Bible study session for an hour, before he opened fire. His manhunt spanned in two states, and he was arrested about 245 miles north in Shelby, North Carolina, during a traffic stop, Charleston Police Chief Gregory Mullen said at a news conference Thursday.

Police also said the shooter was arrested twice earlier this year; once on a drug charge and later for trespassing. Federal law enforcement officials said Roof had declared his hatred for black people. Attorney General Loretta Lynch, who called the shooting “barbaric,” said the U.S. Justice Department has opened a hate-crime investigation into the case.

“I have a heavy heart,” said Hazel Dukes, president of the NAACP New York State Conference. “A man sat in the church for an hour before he took nine of our people. I hope people will not retaliate, but stay vigilant.”

Like many others at the vigil, Carmen Perez, a prominent ‘Black Lives Matter’ activist, believed the tragedy is race related and hopes something "positive" will come out of the case.

“There are some people who are not ready to accept the liberation of black people,” Perez said. “For it to happen in a place of worship, it's heartbreaking and this awakens us as a community. There are so many things that are happening right now. I hope this brings us together to work for the liberation of our people."

As the AME churches nationwide mourns the loss of their own, Rev. Belin III said “the issue we need to address now is how people are able to get guns freely.”