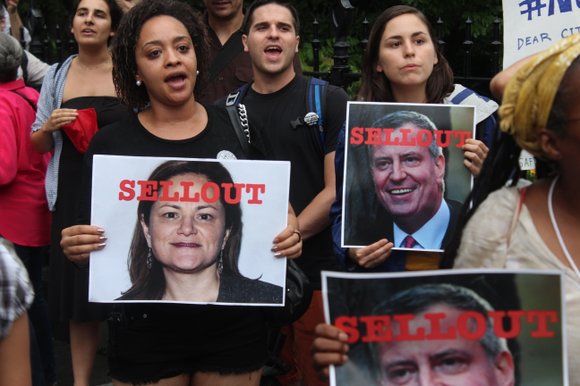 Dozens protested against the move outside City Hall Tuesday evening, a day after the city’s two top leaders concluded negotiations with a ceremonial budget handshake. Some protesters held signs with the word “sellout” over pictures of de Blasio and Mark-Viverito. Others had signs that read, “We Want Justice. No More Police,” while chanting, “1,300 we say no! NYPD has got to go!”

“Here in New York, we’re not fighting Republicans or Confederate flags,” police reform activist Josmar Trujillo argued. “We’re fighting liberals and sellout politicians. We have to make sure we fight back and hold them accountable. Let them know they sold out the community of color in this city. This will forever be known as the ‘1,300-Cop City Council.’”

Mark-Viverito, who led the charge to hire more officers, initially requested 1,000, a number Police Commissioner William Bratton backed. De Blasio had repeatedly rebuked the proposal, saying that he’s “comfortable” with the current NYPD headcount. But after final budget talks, he made a surprise reversal and even added more to the number requested.

“Over the last weeks, there’s been a much deeper conversation with Commissioner Bratton about how this vision could establish neighborhood policing for the first time on an ongoing basis in this city,” de Blasio added.

“You think 1,300 more is the solution to this?” she questioned. “The last thing we need is 1,300 more cops. We have a police force that is untrained and don’t know how to approach people in the communities they’re suppose to be patrolling.”

Like many others at the demonstration, Ortiz said the $170 million could have been used to create jobs and provide more resources in communities.

“This is a smack in the face,” she added. “Shame on you, Mayor de Blasio and City Council.”

The additional officers will now bring the size of the nation’s largest police department to 35,800 by July 1, 2016. The $170 million cost for hiring will be offset by $70 million in savings by preventing officers from doing overtime. Bratton said 300 of the new officers are to be used for counterterrorism, and 400 civilians will be hired.

At the budget agreement ceremony, Mark-Viverito maintained that the increased police headcount will help “bridge the divide between communities of color and the NYPD.” She added that city social service programs will be expanded under the new budget, including the creation of more than 50,000 summer and year-round jobs for youths.

Nonetheless, Monifa Bandele, a spokeswoman for Communities United for Police Reform, said, “It’s disappointing and perplexing that the city budget will increase the NYPD headcount when systemic problems with police accountability and culture that allow New Yorkers to be abused and killed have yet to be fixed.”