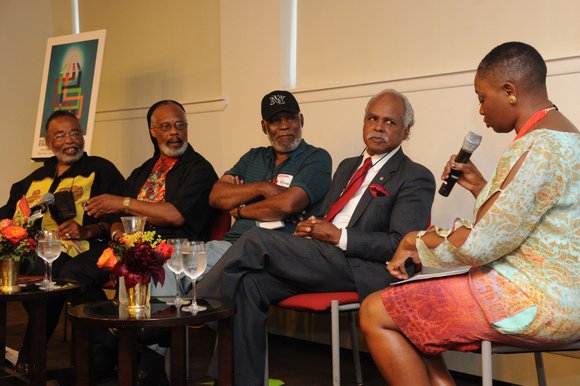 What do you get the man who “has everything” for Father’s Day? How about a chic party in his honor? Heather Carter, daughter of legendary artist Robert Carter, didn’t exactly come up with the “Black Art Legends” event as a Father’s Day gift, but it was perfectly timed to be just that.

Thursday June 18, art lovers came together at the greenhouse in the Scholastic building in Soho to honor some of the most famous icons of the Black art world, including Robert Carter, Frank Frazier, James Denmark and Paul Goodnight. Attendees were treated to a Q&A panel with the artists themselves, moderated by Essence magazine Editor-in-Chief Vanessa DeLuca. The panel was followed by a reception set to the sounds of the Arts Jazz Collective.

Said Heather Carter, whose sister Holly and mom, Panchetta, were also in attendance, “The impetus was for me that it was the right time and it was necessary to elevate the visibility of the four artists and really celebrate their talents, and each of them has been doing their thing for over 50 years. Still, a lot of people don’t know their names and they should be household names. I felt it was important for me to do my part to bring attention to their talents.”

Frazier, a Vietnam War veteran whose work overtly channels Black American history of slavery and political resistance, seemed to be holding court. Seated against a backdrop of his own artwork and surrounded by admirers, his succinct reply to the question of what most motivated him was, “All my work is about what is going on socially today.” He also shared that he is currently working on a piece commissioned by the NAACP called “Justice.”

Denmark is a graduate of the prestigious Pratt Institute and was mentored early on in his art career by the great African-American art historian Dr. Samella Lewis. Denmark shared his definition of the Black artist. “I think the Black artist is a positive messenger to put in pictorial form, the things that many times the spoken word can’t bring to bear in the consciousness of the people as these events unfold. Some of the events are very tragic in nature, and people act out in anger. Anger translates into physical violence, but a lot of times an artist can portray something pictorially and it will last for generations, and it will tell a complete story because it comes from a creative force and it comes from a very powerful, spiritual source.”

As far as what usually inspires and motivates him, Denmark said, “I always look to the past, I always look to the African ancestors, to the creativity that they left.” Some of Denmark’s work is also part of the collection at the Metropolitan Museum of Art.

Robert Carter, an art professor at Nassau Community College on Long Island, is noted for his whimsical and nostalgic 3-D installations, as well as his paintings. What has always inspired him are what he calls “social experiences, political experiences, economic experiences. Almost whatever you’re going through personally, what the community is going through, find their reflection in the work. You are what you eat, so you are what you are a part of.”

Carter, wearing an omnipresent gentle smile and fitted grey suit, was also eager to share his “great amusement” about a story then in the news about a woman named Rachel Dolezal. Dolezal, who is white, pretended to be Black and became head of the NAACP Spokane office. She professed a great, lifelong interest and appreciation for Black culture when the subterfuge was finally revealed. “Let’s say we could turn the calendar back and go back 40 years and tell someone,” he explained in cheerful disbelief. “They wouldn’t believe it—a white person wanting to Black? Unbelievable! That’s why I find it ludicrous!”

Goodnight is also a Vietnam War veteran. Suffering from post-traumatic stress disorder after the war, he literally lost his voice and acquired a drug habit. Many around him thought he had lost his mind. Eventually, an interest in art restored his voice and quieted the various demons that had plagued him since coming home from the war. He received his degree from the Massachusetts College of Art in 1976. His works have since been featured on “The Cosby Show,” “Seinfeld” and “The Fresh Prince of Bel-Air” and are part of the art collection at the Smithsonian Institution.

“My inspiration,” he says, “has been the people who live in my neighborhood. The people who have taught me to stay in the game, the people who have supported me, events that I have encountered in my travels around the world from Russia to Africa to Nicaragua, to Brazil, throughout the Caribbean.” His advice for others is, “If you find something that you naturally do, that you naturally gravitate toward, your responsibility is not to hold onto it, give it back to somebody else. It is all of our responsibility to give back. We are citizens of our community, whatever happens in our community also reflects on us. We can’t always paint what we like to paint. Sometimes we have to paint what we have to paint or communicate through a visual means, if we don’t do that, we’re not using our ‘voice’ for the benefit of the whole community.”

Also in attendance was former Ailey dancer Dwana Smallwood. Smallwood, who has recently opened her own performing arts center in Brooklyn, talked about how having been a dancer executing choreography based on the Black American experience colors the way that she interprets and appreciates this particular medium and expression of art. Said Smallwood, “Art through time has been, I believe, the one thing that has helped us to sustain ourselves throughout all the atrocities that have happened in different cultures. We have all experienced something, and it was art in the form of music, dance or visual arts has allowed us to see the other side’s point of view.”