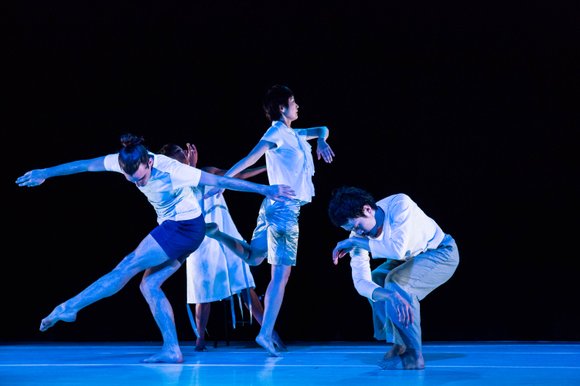 The New York dance world first knew of Japanese-born fashion designer and butoh choreographer Kota Yamazaki through his collaboration with Germaine Acogny and her Senegal-based company Jant-Bi. The pair worked together from 2001 until 2004. Advertised as “Africa Meets Japan in Dance,” the joint work, “Fagaala” (“Genocide” in Wolof, a language spoken widely in Senegal), was about the effects of genocide. Yamazaki won a New York Dance and Performance Award (Bessie) for his contribution soon after he moved to New York City, disbanded his Japanese-based company, rosy co, and formed Kota Yamazaki/Fluid hug-hug in 2002.

The latest work for the new company, “OQ,” premiered June 5 and 6 as part of the Japan Society’s spring season. “OQ” is born from “okyu,” or the phonetic reading of the Japanese word for “palace,” and an ancient Japanese poetry reading ritual called “renga,” “linked poems consisting of multiple stanzas composed and recited collaboratively by multiple authors,” notes the release. Following this literary technique, the celebrated cultural collaborator brings together five dancers (Lauren Cox, Leah Morrison, Mina Nishimura, Silas Riener and Ryoji Sasamoto) with differing cultural and dance backgrounds for what was billed as a melding of Western contemporary, butoh and hip-hop.

In “OQ,” Yamzaki’s landscape commands attention to truly be part of the linked movement conversations within his multiple poetic voices. There were two parts. In the first, each of the five dancers come and go at a relatively quick pace on the white floor while the mostly still Sasamoto floats through languid shapes on the other side of a hanging white structure made from parachute material.

Cox, Morrison, Nishimura and Riener, donning funky, mismatched prints, color all corners of the stage, and though their movement styles are imbued with individual flavor, Yamazaki manages to make this sea of solos mesh. Silas stops, covers his mouth and walks with monkey arms and bent knees. Cox tosses off a few pop-and-lock elbows and knees, and the long-limbed Nishimura and Morrison shift from soft, convulsing torsos to darting legs and arms. At times, as a group, they wiggle their fingers, share a movement that dominos and connects, but just as quickly, they shift ideas.

Identified by acrylic chairs and less colorful costumes (grey and white), the second part begins. Here, Yamazaki’s stark and minimal movement canon is the key: sit, observe, crawl, walk, lie down (for a while), stop and pose, cross the stage, hands akimbo, drop into a hip, then repeat. The quiet of the second part is framed by soft piano chords that help to close as, collaboratively, bodies move slowly, lights fade—the end. Another success.