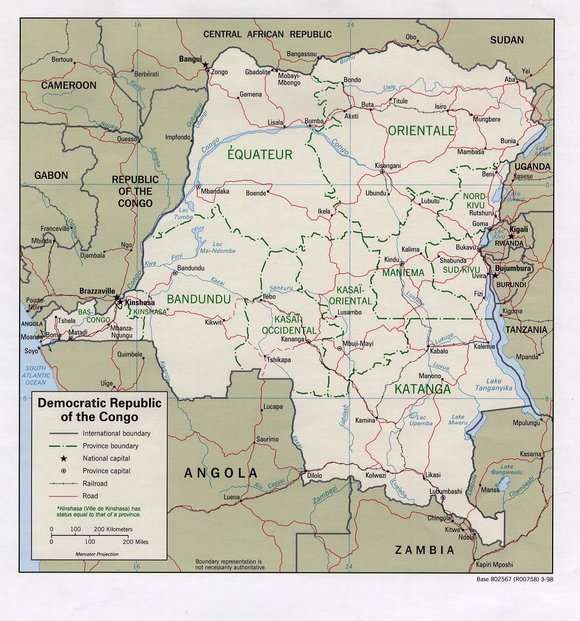 Democratic Republic of the Congo Contributed

Lately, the United States has moved to aggressively to bolster pro-western forces in the Ukraine and promote democracy in the Middle East and Asia. But once again, the U.S. and other western powers are largely ignoring Africa, even as democratic movements are quietly spreading throughout the continent after a generation of leaders who often hoarded power and wealth at the expense of their people.

This neglect is a harsh echo of the exploitation the continent has been subjected to ever since European powers met at the Berlin Conference in the late 1800s to draw boundaries that wound up toppling traditional, African societies in favor of a map that gave these outside powers control over Africa’s rich array of natural resources.

Now, even as new, global powers like China move in to exploit Africa’s riches, there are powerful signs that Africans are marching into a new phase of their history, as they attempt to assert the principles of self-determination, freedom and democracy, sometimes against difficult odds.

Some of these signs are coming from the Democratic Republic of the Congo, where the country’s constitution does not allow President Kabila to run for a third term in the 2016 election. Sworn in as president in 2001 after the assassination of his father, Kabila won two subsequent elections for five-year terms.

Kabila has refused to comment on his future, raising concerns that he plans to cling to power past 2016. But a government spokesman has said that the president intends to respect the constitution, according to Reuters.

The DRC is not the only African nation where there are flickers of democratic hope. As a result of disputes over the elections of 2007, Kenya entered a dark period of violence that was driven by ethnic rifts. Indeed, a number of leading Kenyans were charged with crimes against humanity in the aftermath of the violence, according to reports.

But by 2013, the dynamics in this country changed dramatically, as legions of voters participated in what were widely regarded as peaceful elections that brought Uhuru Kenyatta, the son of famous independence leader, to victory.

A similarly peaceful transition took place in Zambia, where Edgar Lungu was sworn in earlier this year as the country’s new president, after winning a hotly contested election that was held after the death of the previous president, Michael Sata.

Reports showed that Mr. Lungu won slightly more that 48 percent of the vote, compared with the nearly 47 percent picked up by the opposition candidate, Hakainde Hichilema. While the opposition complained that there were irregularities in the election, the African Union congratulated Zambians for “organizing an exemplary, successful and peaceful election,” according to published reports.

To be sure, there is a long way to go in Africa. Consider, for example, the fact that Nigeria recently delayed its hotly contested presidential election at the insistence of the ruling party as it faced possible defeat for the first time in more than 15 years. The opposition party quickly denounced the move as a significant setback for democracy in Nigeria.

Africans are nonetheless moving in the right directions – if not always that smoothly. And so while the United States and other western powers focus on bringing democracy to Eastern Europe, the Middle East and Asia, Africans know that they cannot afford to wait for the west.

But the west is making a grave mistake in ignoring what is going on in Africa. Why? Because the stakes in Africa are enormous. In a 2012 article looking at the state of democracy in Africa, The Economist put the matter in perspective: “Setting aside the quality of African democracy, all but a few of the continent's 1 billion people now expect to vote in regular national polls. That is something which 1.5 billion Asians, for all their impressive economic performance, cannot do.”