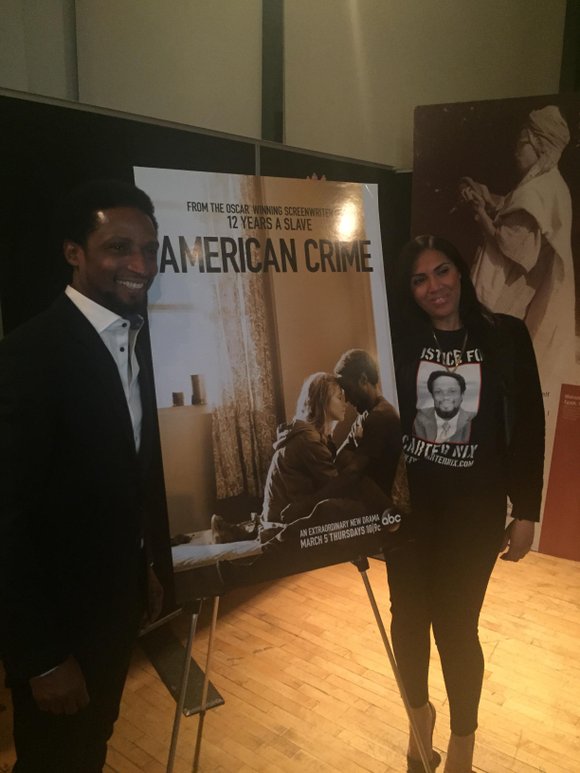 ABC may have another hit series, American Crime debuts this Thursday March 5 at 10 PM. From John Ridley, the Academy-Award winning writer of “12 Years a Slave,” the series looks at one crime that stirs up racial tensions in a small town.

The show takes place in California, but it kicked up a lively conversation at a recent screening at the Malcolm X and Dr. Betty Shabazz Memorial and Educational Center in Washington Heights.

“When was the last time anyone saw this such a diverse cast, diverse plot, and a diverse case represented on public broadcast television?” Ridley asked the audience. His cast includes Felicity Huffman (Desperate Housewives), Regina King (Southland) and the Oscar-winning Timothy Hutton (Ordinary People).

The actors, producers and others behind the scenes on the show say they were thrilled to bring a sneak peek of their show to the iconic Malcolm X center in the Heights. “It is a place that was very instrumental in my upbringing, so when the executive producer Michael McDonald approached me with the idea, he said he wanted to do something very communal,” says Latino actor Elvis Nolasco who plays main character Carter Nix in the series and was raised in Washington Heights.

Although the drama series is based around race, politics, and gender roles, McDonald stresses he hopes it starts a conversation not controversy. American Crime has all the right elements to get people talking. It follows the trial of a fatal robbery set in Modesto California, after a home invasion leaves a young white couple dead and near death. The four suspects are all of African American and Latino descent.

Ridley stresses that he hopes the show goes beyond the lurid.

“We know the headlines but we don’t know what it is like for these families, day in and days out,” he says. “To feel that emotion through perspectives we may not agree with but there is a fundamental truth to it will hopefully shift some views.”

One story line was inspired by the Central Park 5 case that involved the rape of a female jogger in 1989. “The particulars and the circumstances change but society’s perceptions of who is allowed to be a victim and who is more likely to be victimized does not,” explains Ridley.

Even Spike Lee attended the event to show his support. When asked what brought him out, he pointed to the creator and producer and said – “them.”

Will you tune in Thursday night? Hashtag #AmericanCrime on social media to join the conversation.