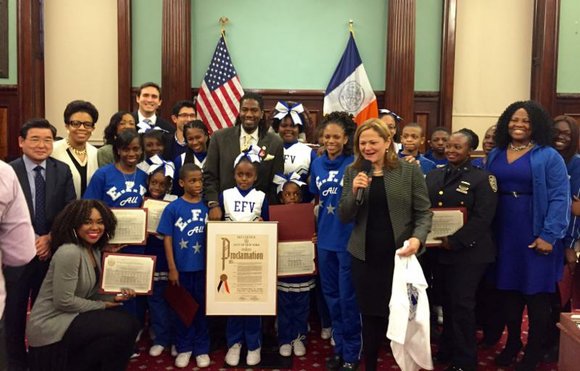 Deputy leader and chair of the City Council’s Housing and Buildings Committee, Jumaane D. Williams, honored the East Flatbush Village, Inc. All Stars Youth Cheer, Step, and Dance Team, along with Council Speaker Melissa Mark-Viverito, during the pre-stated ceremonial in the chambers of City Hall, for their outstanding teamwork at the 2014 American Youth Football and Cheer National Championships.

Dec. 14, 2014, EFV took 14 young women and men from their cheer team to compete in the 2014 American Youth Football and Cheer National Championships in Kissimmee, Fla. This event was the second time EFV All Stars have competed in Florida at the national level. Division 8 placed 3rd in the dance category and Division 15 placed 1st in the step category and secured the titles of 2014 National Step Champions and 2014 Step Grand Champions.

“These All Stars are exceptional examples of youth doing amazing things in District 45,” said Council Member Williams. “I am proud to stand with Speaker Mark-Viverito and my council colleagues to recognize these talented young people and to congratulate them for their success at the national competition. It is my hope that we continue to see great things out of these young people and that there are more occasions for us to celebrate in the near future.”

“As an organization, East Flatbush Village Inc. sincerely expresses our thanks to Speaker Melissa Mark-Viverito and Council Member Jumaane D. Williams for presenting our cheer, step, dance team and coaching staff with this honor,” said Monique Waterman, founder of EFV. “We also would like to thank our extended EFV family: NYPD 67th Precinct, AbunDance Academy of the Arts and Regime for their partnership and dedication to our youth and our community.”

EFV is a non-profit committed to providing support and information to low-income and indigent populations. Since it opened, it has worked to strengthen the community with programs and activities that empower all participants. It not only serves young people but also provides great resources to entire families. EFV is a one-stop shop that incorporates educational and social services, nutritional workshops, youth athletics, senior activities, an anti-violence center and more. All of its creative energy, commitment and ambition is exemplified by the EFV All StarsYouth Cheer, Step, and Dance Team.