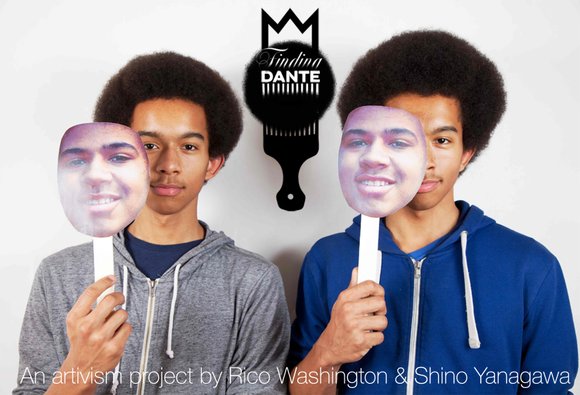 “Stripped of his private security detail and notoriety, how would New York City Mayor Bill de Blasio’s biracial teen son, Dante, theoretically fare in an encounter with the NYPD?” This question is asked by two local artists, Rico Washington and Shino Yanagwa, in their new work, “Finding Dante.”

While attending a march in honor of and in the fight for justice in regards to Eric Garner, Washington was reminded of remarks made by de Blaiso on the safety of his son. It is no secret that de Blaiso is currently married to a Black woman with whom he has two biracial children.

We live in a culture where being Black is sometimes considered a crime in itself. Because of this cultural bias, parents are forced to prepare their Black sons for the realities of the racial climate. De Blasio and his family are no exception.

While at the march, Washington saw many young boys with Afros who could easily have been mistaken for de Blaiso’s son Dante, if one were looking quickly and carelessly. This observation is what sparked Washington’s interest in this new project, “Finding Dante.” The exhibit is a response to recent tragedies, including those of Michael Brown, Eric Garner and Travyon Martin.

The project involved photographing and interviewing young Black and Latino boys in Dante’s age group, sporting an Afro hairstyle. This age group was important when deciding who to interview because Washington feels that “voices from this age group are not really being heard.”

The exhibit is open until March 8 at 1351 Amsterdam Ave. However, it is only the first part in a multifaceted project. The artists hope to continue the exhibit, eventually including video interview footage, an interactive component that will urge visitors to “find Dante” in a crowd of Black and Latino faces and an after-school program for young kids to come together to exchange ideas and participate in discussions with their peers and mentors. To follow the project’s journey, visit www.findingdante.org.

The artists hope to reach de Blasio by humanizing the problem in the nation and, particularly, in New York City for him. Putting his son Dante on a platform for crucial discussion gives issues revolving around racial profiling a very real and urgent face. When asked why the artists believed so strongly in this particular work, Washington stated, “We’ve been here before … and we need to understand it is still going on.”