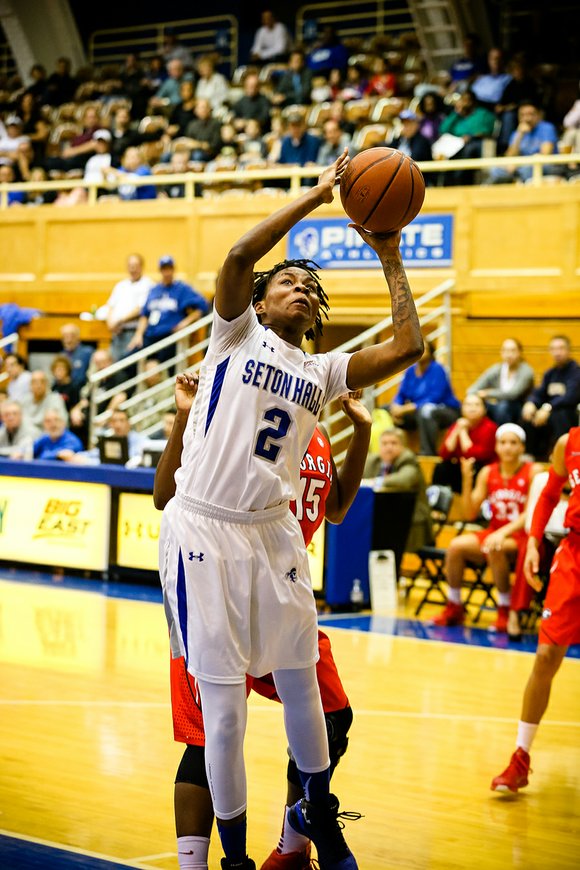 With Seton Hall University’s victory in the final game of the regular season—an 85-76 come-from-behind win over Butler—the Pirates head into the Big East tournament this weekend with the Big East regular season title and the number one seed. It’s an especially sweet victory for Anthony Bozzella, a Seton Hall alum who was named head coach in 2013.

Seton Hall’s roster is rich with veteran talent. Three players are graduate students who have brought a level of maturity to the team as well as a hunger to establish a new identity for the program. Bozzella and men’s coach Kevin Willard have built a strong Seton Hall basketball community, with the two teams being mutually supportive.

“The older players understand day to day what to do,” said Bozzella. Forward Janee Johnson, who turns 24 next week and has battled injuries throughout her collegiate career, cannot put in as many hours of practice as younger players, but the three veterans bring leadership.

“They understand what it takes to get through a game,” Bozzella said. “We’ve been down numerous times in double figures, and you never see a sense of panic. You never seen nervousness. They understand a game is 40 minutes, and they do a really nice job with that.”

When Bozzella took the job, he wanted to establish an enduring program. Johnson and cousins Ka-Deidre Simmons and Daisha Simmons—all of whom were in double figures in the game versus Butler—have been instrumental is making his vision a reality and instilling a winning mindset in younger players.

“When they leave, while we might not be able to replace them experience-wise or even talent-wise, the day-to-day operations of the program, we know how to do that,” Bozzella said.

They’ve also given the younger players a chance to come into their own, including junior forward Tabatha Richardson-Smith, who scored 25 points in the Butler game, and junior forward Tiffany Jones, a Manhattan native. Bozzella said Richardson-Smith’s offensive prowess is obvious, but her defensive skills have improved tremendously this season.

“We instilled a work ethic, and they really latched onto it,” Bozzella said. “We also want to have fun and enjoy the moment as well. … There’s definitely a sense of urgency and a sense of ‘Let’s end it on the right note.’”