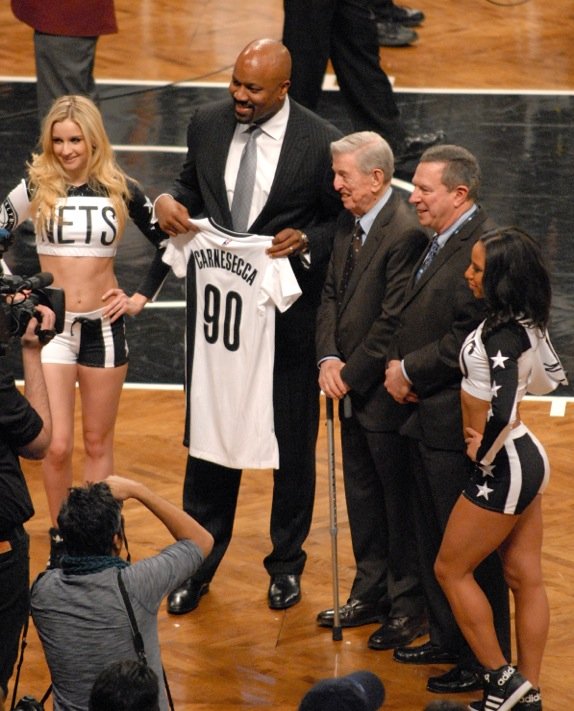 The spectators collectively cheered as one when they spotted the slowly walking figure moving toward the court inside Brooklyn’s Barclays Center. The closer he came to the court, the louder the cheers became.

He didn’t need to be announced, because the voices represented a multitude of men and women who were more than familiar with the man who brought hoops glory to the St. John’s University basketball program.

The crowd roared when Lou Carnesecca reached center court. “Looie! Looie!” they yelled in unison. The Barclays arena came alive, as had Alumni Hall at St. John’s, which now bears the name Lou Carnesecca Arena, on so many winter nights. It was a tribute to the coach who brought his St. John’s teams to the NCAA tournament every year.

Carnesecca was named the National Coach of the Year some three years running. Before St. John’s, he did a stint at St. Ann’s High School, now the athletic powerhouse Archbishop Molloy High School. His tenure at St. John’s was split by three years of doing the pro game with the Nets in the former American Basketball Association.

The names of the great ones who ran his fast breaks and played the tough “D” would fill this whole page. Many of those greats have found their way into the Basketball Hall of Fame in Springfield, Mass., where he is one of the legends who fills the room.

So on a memorable evening in Brooklyn, once again the voices were raised to honor one of the greatest of men and greatest of coaches—“Looie!”