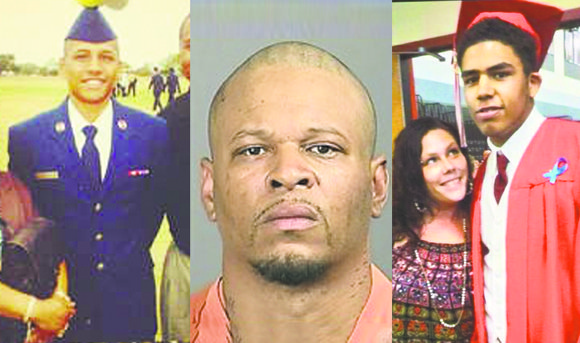 People around the nation are asking if police gun violence is reaching epidemic proportions.The name Anthony Terrell Robinson Jr., 19, is now on the list of unarmed men of color fatally shot by police. Protest again ensued, fueling the out-of-control distrust between police and the community.

The epicenter this time is Madison, Wis., on the evening of March 6. Reports indicate white police officer Matt Kenny followed Robinson, who is biracial, to a house, where an alleged altercation took place. Police officials allege that Robinson attacked Kenny, resulting in Kenny drawing his weapon and shooting Robinson. He later died at the hospital.

Robinson is not Kenny’s first victim. According to reports, the officer was involved in fatal shooting in 2007, but was cleared of all charges.

The Robinson shooting has been compared with the shooting of Michael Brown in Ferguson, Mo., in what is being called another misuse of excessive force by police.

“My son has never been a violent person,” said Andrea Irwin, Robinson’s mother. “Never. And to die in such a violent, violent way, it baffles me. My son is now another statistic of the things that are happening all over the Unites States. Another Black kid shot by the police for no reason. This has got to stop.”

The Dane County, Wis., chapter of the NAACP said in a statement that solutions must be pushed for within in the criminal justice system that will help keep communities safe.

“While there will be reactions from community leaders, faith leaders and concerned citizens, the NAACP calls for calm and vigilant monitoring of events as they unfold,” chapter officials said.

Madison Mayor Paul Soglin said he met members of the family and members of the community who were at the scene and heard their concerns. He also spoke to Madison Police Chief Mike Koval and discussed concerns.

“Our community has many questions—questions that I share,” Soglin said. “There will be answers. There is a new state law that mandates an independent investigation into officer-involved shootings. Investigators from the Wisconsin Department of Criminal Investigation were on the scene immediately last night. We must give them time to do their job.”

In a blog post this week, Koval apologized for the shooting and stated that his department faces a serious test of trust.

“Reconciliation cannot begin without my stating ‘I am sorry,’ and I don’t think I can say this enough. I am sorry,” Koval said. “I hope that, with time, Tony’s family and friends can search their hearts to render some measure of forgiveness.”

As with similar incidents, protests in Madison have ensued with chants in the streets of “Black lives matter” and “Hands up, don’t shoot.” Hundreds of people have reportedly taken to the streets every day since Friday, when the shooting occurred. Thousands of students from middle school to college staged a walkout this week, gathering at the sstate capitol building in a peaceful protest. A viral video shows hundreds of people flooding the inside of the capitol building chanting and holding signs demanding justice.

One of the key organizations involved in the protests is the Young Gifted and Black Coalition, which was also involved in the Black Lives Matter demonstrations in Ferguson.

“Our ultimate goal is to be able to hold our own communities accountable and to expel what we consider an occupying force in our neighborhoods,” the group said in an open letter. “Our people need opportunities for self-determination, not policing. We aim to move towards community-controlled policing, with advisory boards in communities throughout Madison and Dane County.”

A spokeswoman for Wisconsin Gov. Scott Walker said,“Our thoughts and prayers are with all those involved. An overwhelming majority of police officers follow procedures and do a good job of protecting and serving the public.”

Since the police slaying of Robinson, at least two more have occurred in as many days. Even as President Barack Obama was opining in Selma, Ala., this past weekend on the historic 50th anniversary of Bloody Sunday, saying, “I don’t think that what happens in Ferguson is typical,” white cops were proving him wrong.

According to numerous reports, a possibly bipolar Anthony Hill, 27, was seen running around naked in the Chamblee Tucker Road apartment complex in Chamblee, Ga. Allegedly, according to a caller, the Air Force veteran, who had served in the Middle East, was “acting deranged, knocking on doors, and crawling around on the ground naked.”

White police officer Robert Olson arrived on the scene, he confronted the disturbed man and shot him twice. Even the county police chief, Cedric Alexander, told reporters that he could “reasonably assume” that Hill had a mental health issue.

Evidently, Olsen did not “reasonably assume.”

As news broke Wednesday, March 11 that Ferguson Police Chief Thomas Jackson will probably step down, activist Tamika Mallory proclaimed, “Enough! I spent this past weekend commemorating the 50th anniversary of ‘Bloody Sunday’ in Selma, Alabama. Today, I am outraged by Bloody Tuesdays in Los Angeles, California and Chamblee, Georgia, Bloody Fridays in Madison, Wisconsin and Aurora, Colorado. Stop killing us. Stop killing our children, and sisters and brothers. Stop killing our fathers and mothers and friends. Stop killing us because we’re mentally sick or in the wrong place or guilty of making wrong choices. Stop killing us because it’s easy, or because you’re scared or because you don’t see our humanity. Black lives matter!”

Mallory added that the “relentless execution of unarmed Black and Brown people by police officials is intolerable,” and offered her sympathies and to the families of Robinson, Hill and Vinzant. She told the AmNews, “These men were executed.”

“If you look at the state in this country and the things we’re going through right now across this country with police-involved shooting, certainly it's a concern to many Americans,” said Koval. Seemingly echoing the call for independent prosecutors in such cases, he added, “There has certainly been recommendations that have been made in regards to moving towards more independent type of investigations.”

The Justice League NYC has prepared a “Justice Package” that consists of reforms aimed at bringing about systemic change and will be delivered via a “March2Justice” from New York City to Washington, D.C., this April 13. “The war being waged on our communities by police who shoot first, ask later and kill with impunity poses a grave threat to our communities. We are in a moment of national crisis, and it requires a national response. We must be relentless until Congress acts,” concluded Mallory.