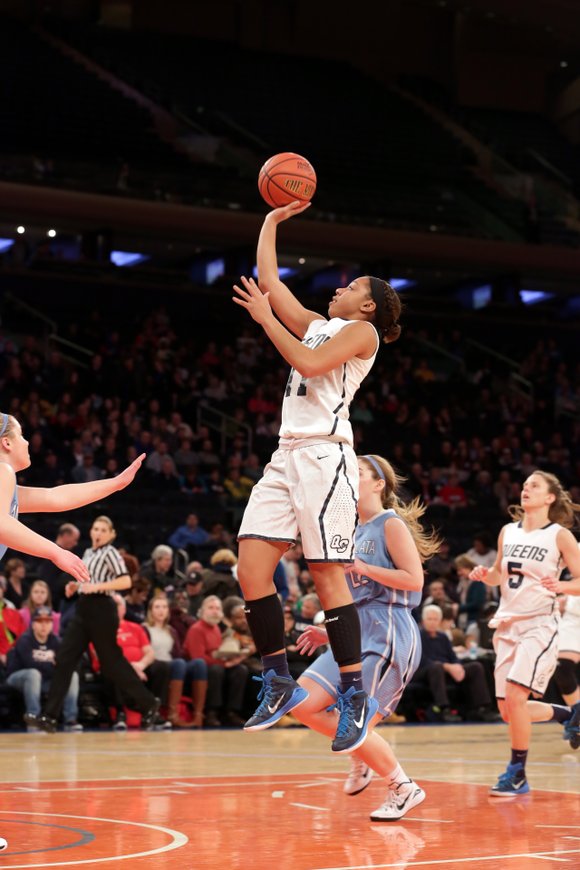 It was a close battle throughout, but then one of the brightest stars in Division II women’s basketball, Madison Rowland, made a crucial basket, drew the foul and sank a free throw to give the Queens College Knights the edge they needed to secure a victory over NYIT in the East Coast Conference final. With that, the Knights earned their first ECC championship since 2009 and a trip to the Division II NCAA tournament.

“It’s an amazing feeling,” said Rowland, who scored 38 points in the 65-63 victory and was named Most Outstanding Player. “I didn’t even notice my points. I was just playing, trying to get the win. Nothing went through my head but what I had to do next, ‘get this stop’ or ‘get this rebound.’”

Rowland, a sophomore guard-forward, has already passed the 1,000-point mark and could well become the Knights’ all-time leading scorer before the end of her college career. From Albany, N.Y., she chose Queens College because older sister MacKenzie Rowland, a post player, was already attending. MacKenzie Rowland contributed 15 points in the ECC final win.

The sisters refuse to take credit, seeing this season’s successes as team efforts. Both are excited to have an enduring impact. Madison Rowland said her experiences in building the program have shaped her character on and off the court.

“We’ve worked so hard from September to now,” said Madison Rowland. “Did so much practice, running and it’s finally paid off. … It’s great to have my sister on my team. To be part of a legacy at Queens is an amazing feeling. Coming into Queens, I knew coach Bet [Naumovski] wanted to build a program around a couple of us, but living it and being a part is surreal.

“I’ve become more of a leader, more confident. It’s helped me grow as a person.”

Madison Rowland, who hasn’t yet declared her major, but is leaning toward media studies, said her teammates have had high expectations this season. Ever since winning at the Maggie Dixon Classic in January, the team has felt strong and confident. The season has been filled with hard work, dedication and heart.

They face Stonehill College Friday in the first round of the tournament. The focus is one game at a time and making a team effort.