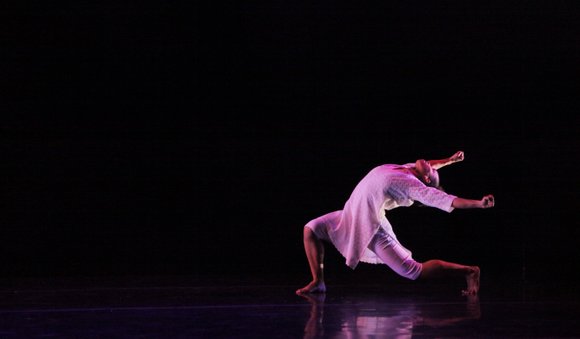 Evidence, A Dance Company in “Torch” (top left) and Annique Roberts in “The Subtle One” (bottom) (Ayodele Casel photos)

There is no mistaking the now well-tuned signature movement style and vocabulary of Ronald K. Brown. His mix of West African, house and modern dance should probably have its own brand. After all, the “gaga” technique, developed by Ohad Naharin, a contemporary of Brown, when performed by Brown’s dancers, distinguishes them from all others.

Brown’s history is rich with sprinklings of dance icons, including Mary Anthony and others from the downtown scene in New York during the 1980s. In an interview with Katie Dravenstott for TheaterJones, Brown confirmed, “When you touch African [and Cuban] dance, it automatically becomes something else. I was exposed to traditional and social dances that really broadened my vocabulary … [they] make sense to my body [they] feel really good on my body … And I incorporate all these techniques into my movement vocabulary.”

For its 30th season (Feb. 24 to March 1) at the Joyce Theater, the Ronald K. Brown/Evidence Dance Company will present a mix of works from 1985 to 2014 that celebrate Brown’s singular signature. Three of the works were created for other companies: “Gatekeepers” (1999) for Philadanco, “Grace” (1999) for the Alvin Ailey

Each company offers good renditions of the pieces, but the Brown technique comes through when members of his company, who clearly cultivate his nuances, are on point. In the excerpt from Brown’s “Lessons: Exotica & March” (1995), we get another chance to see the dancers own and deliver the subtle melding and morphing of the vocabulary, with suspended jumps in which they right themselves just before falling, cantilevered balances, shoulder rolls that begin in the lower back and ripple up the spine before settling in the shoulders (Annique Roberts is especially exquisite with this movement), or in a dance-off in which each dancer takes a turn at punctuating his or her version of the Brown technique.

Running one after the other, and complimenting each other, were solos danced by Brown and Coral Dolphin. In “Through Time and Culture” (2014), Brown, dressed all in white, is the smooth oracle slipping through movement after movement with meditative pauses, the lovely Coral Dolphin follows, devouring the stage in an excerpt from “One Shot: Bellows” (2007). The soft and “subtle” side of the Brown technique is seen in “The Subtle One” (2014) to live and original music by Jason Moran and his band, the Bandwagon.