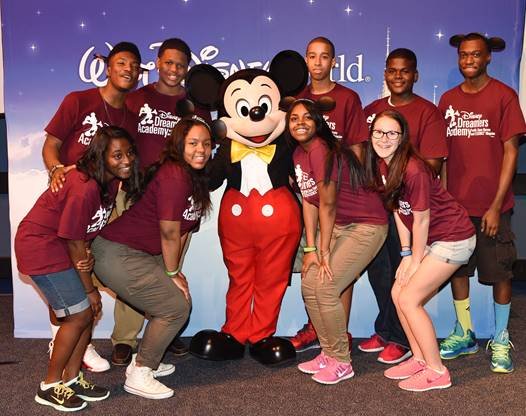 At a press conference Thursday, Harvey discussed the importance of changing the mindset of youth by concentrating on their dreams.

“We try to grab these kids at an early age before they know they can’t do something,” he said. “It’s not your education, it’s your dream. The moment you stop dreaming, it’s a wrap. If you understand the principles, you get to be successful.”

Johnson received the program’s top honor of Dreamer of the Year. The aspiring music producer took on leadership roles during his project of a song he produced at Disney’s recording studio.

“I’ve been playing drums since I could pick up sticks,” he said. “I hope to gain guidance this weekend. For a dreamer, we have an idea of what we want to do, but we don’t know the steps to take. Coming here, all I’ve been learning are the steps to take and things I can apply to my life immediately.”

Hanley, 16, is an aspiring actress and participated in a workshop where she learned about the path she must take to make her dream come true.

“My dream is to become an actress and make TV shows, movies and documentaries to inspire others all over the world with any type of circumstances they’re in,” she said. “I hope to gain knowledge, and I want to gain courage. I don’t have a lot of courage right now, and I hope to gain a lot of that.”

This year’s group traveled from nearly 30 states and the District of Columbia for the all-expenses paid trip to Disney World. Teens are participated in hands-on workshops in fields they selected. Experts, motivational speakers and celebrities served as their mentors and instructors.

“What we look for is demonstrated curiosity, courageousness, resourcefulness and dedication of pursuit of the dreams,” said Dorcas Williams, marketing and strategies manager for Walt Disney World Resorts. “What I hope the Dreamers leave with is inspiration and encouragement because we all know there are struggles along that path. This gives them to motivation and strength to continue.”