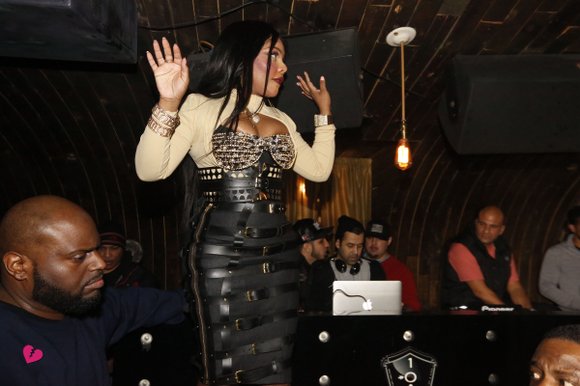 Recently, rap songstress and Notorious BIG confidant Lil’ Kim drove the crowd wild with a tribute to Biggie at New York City celeb hub 1OAK NY. The petite powerhouse performed four songs for the crowd, which showed up to pay homage to the Brooklyn native and hip-hop icon. DJ Jus Ske spun some of Big Poppa’s biggest hits as the crowd danced all night.

Hot new couple alert! Common and Lupita Nyong'o were photographed together at both this year’s Golden Globes and Academy Awards ceremonies. She even tweeted out that their mutual stylist Micaela Erlanger and she were so proud of him for winning the Oscar, the tweet accompanied by a photo of the three of them. Well, March 10, the two Oscar winners were spotted out on a romantic New York City date night that included theater followed by dinner.

First, the rapper from Chi-town and the Yale-educated actress from Kenya were spotted in the audience of the off-Broadway play “Big Love” at the Pershing Square Signature Center in Times Square, The theater even thanked them for coming on Twitter.

When the play ended, they headed around the corner to BEA Restaurant on West 43rd Street for some cocktails and a bite to eat. Common was last linked to Serena Williams, who he ran into on Oscar night, and Nyong’o has been linked to both actor Jared Leto and little-known rapper K’naan. Stay tuned!

Kerry Washington is headed for HBO. The “Scandal” star has signed on to play Anita Hill and executive produce a TV movie for the premium cable network called “Confirmation.” The movie, which is in development with HBO Films, will detail the explosive 1991 Clarence Thomas-Anita Hill Supreme Court nomination hearings that brought the country to a standstill and forever changed the way people think about sexual harassment.

According to Glamour magazine, long before she was a two-time Oscar nominee, Viola Davis was just one of many children in the U.S. suffering from lack of food. To spread awareness about childhood hunger and raise money for Hunger Is, the “How to Get Away With Murder” star opened up to Glamour about the harrowing details from her childhood. “I was always hungry, and ashamed, I couldn’t tap into my potential,” Davis recalled. “I couldn't get the business of being me.”

Despite her hardships, the talented actress says she has learned to embrace all aspects of her life.