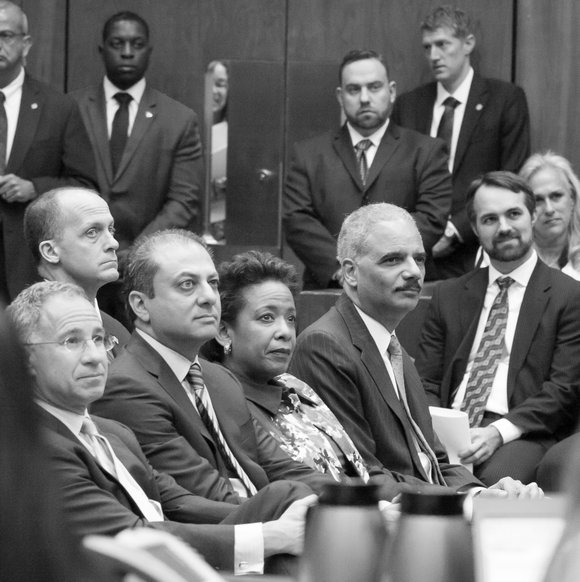 Several days after impressing a Senate panel, Loretta Lynch appeared to be a shoo-in to succeed Eric Holder Jr. as U.S. attorney general. But leave it to the mischievous, mean-spirited Republicans to rain on her parade. At least, we hope, only temporarily.

Just when she seemed to be a lock for the post, particularly with such prominent Republicans as Orrin Hatch of Utah, Jeff Flake of Arizona, Lindsey Graham of South Carolina and Susan Collins of Maine promising to confirm her, there is a snag.

So what’s the problem? The problem is Senate Majority Leader Mitch McConnell and his reluctance to call a vote because of a human-trafficking bill that includes a provision that would establish a fund for victims from fines paid by those convicted of trafficking crimes. These funds, as the Democrats proposed, could be used for abortions, and therein lies the rub.

It’s simply amazing that bills can get past a committee then hit that implacable wall called Republican repugnance. The story here is that Republicans apparently don’t mind gathering funds from predators fined for sex trafficking crimes, but this money can’t be used by the victims to pay for abortions. Republicans contend that such use of the money would compromise the Hyde Amendment, which, except for rape, forbids use of tax dollars for abortions.

What has this got to do with Lynch’s confirmation or the price of rice in China? This boondoggle is very similar to the impasse over Homeland Security funding that included an immigration attachment. We were pleased to see the Republicans capitulate on that measure and allow the Department of Homeland Security funding to go forward while tossing immigration into limbo.

That had as much to do with undermining the president’s executive authority as anything else, and we would be naive to believe that the same shenanigans are not at play in Lynch’s confirmation.

Sen. Chuck Schumer is right on point when he noted that the Senate “can walk and chew gum at the same time,” but this becomes a difficult process when considering any action put forth by President Barack Obama.

In 1984, the Senate took a year to confirm President Ronald Reagan’s nominee, Edwin Meese, for attorney general, but that delay was based on Meese’s messy business practices. And if some Republicans have their way, Lynch will be tarred with the same brush, given the alleged dealings she had with drug lords and money launderers.

All of this is hogwash. Lynch’s problem is that she is a strong Black woman who happens to agree with many of the policies of the outgoing attorney general and the ongoing president.

Yes, the Senate may be able to walk and chew gum at the same time, but we all suffer when the gum is stuck to their shoes and they are politically immobilized.

Two things are clearly immutable—Lynch’s race and her politics. So get over it!