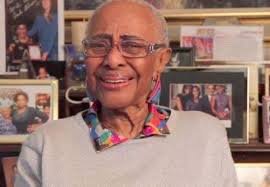 Willie T. Barrow in a video from 2012 (Photo courtesy of the Chicago Urban League)

President Barack Obama said that he was one of the Rev. Willie T. Barrow’s godchildren, “and I have worked hard to live up to her example.” Such has been the lot of many of Barrow’s many godchildren, all of whom are now mourning her death and remembering her undying commitment to civil rights. She was 90.

Barrow, a native of Texas but a longtime resident of Chicago, had been recently hospitalized for a blood clot in her lung, according to a story in the Chicago Sun-Times.

“In sickness and death, her body was frail,” the Rev. Jesse Jackson said of her, “but her spirit and good works were never feeble. Her flame of hope, freedom and justice will forever burn.”

Jackson compared her tireless fight for equality with such legendary women as Sojourner Truth, Rosa Parks and Fannie Lou Hamer, the latter two of whom she must have met at one time or another at the many rallies and demonstrations during her long life. Jackson can speak with authority about her unflagging activism and loyalty because she played a key role in organizing the Chicago chapter of his organization Operation Breadbasket.

She was 12 when she began her crusade against segregation and discrimination, demanding to be allowed to ride on an all-white bus in Texas. This marked an auspicious beginning that culminated in the various marches led by Dr. Martin Luther King, including her participation in the historic March on Washington in 1963 and in Selma in 1965. When King ventured to Chicago to challenge the poverty and housing dilemma there, Barrow was among the community leaders who helped acquaint him with the problems and then provide the foot soldiers for the campaign.

Labor rights and women’s rights, including the rights of gays and lesbians, were also causes she championed. Barrow’s fight for justice and human rights was not limited to the U.S. According to Jackson, she traveled to Nicaragua, Cuba, North Vietnam and Russia, as well as to South Africa when Nelson Mandela was released from prison in 1990. When the AIDS Memorial Quilt was proposed, Barrow made one of the first pieces.

To honor her life and legacy, Chicago Mayor Rahm Emanuel ordered all flags be lowered at city facilities.