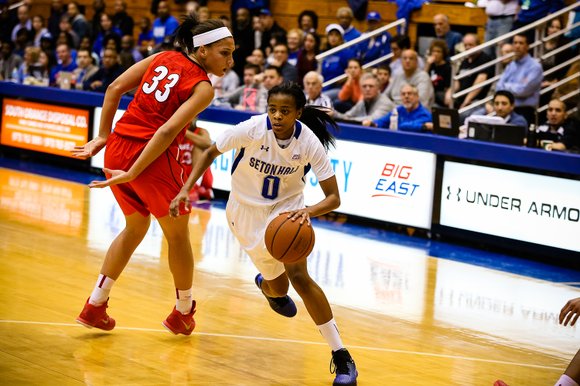 Daisha Simmons, on a hard dribble to the hoop, hustles past her defender. (Photos courtesy of Seton Hall University)

Just when it appeared that no New York City Division I women’s basketball team would be in the NCAA Tournament, St. Francis College in Brooklyn went on a remarkable streak to claim the Northeast Conference Championship and punch a ticket to the Big Dance. Their dance will likely be quite short, however, because the Terriers face defending champion University of Connecticut in the first round.

Three New Jersey teams are headed to the NCAA Tournament. The Princeton University Tigers have been on a remarkable 30-0 streak this season, the only undefeated team in Division I. The Tigers have made several previous tournament appearances under coach Courtney Banghart, but they have not advanced beyond the first round. This year, they have the eighth seed, the highest seed ever for an Ivy League team, and they take on Green Bay in round one.

Seton Hall University is making its first NCAA Tournament appearance in 20 years. Under the guidance of coach Anthony Bozzella and with some veteran leadership among the players, the Pirates have become a true force. They face fellow New Jersey team Rutgers University in the first round.

“Joy, satisfaction,” said Bozzella. “Two years of work to get to this point. We’re very excited.” Three Seton Hall players are graduate students. For them, qualifying for the tournament is a sweet conclusion to their college careers.

Bozzella is excited to be facing an in-state rival in the first round. “We’re expecting a hard-nosed, physical battle,” he said. “I’m expecting a great game.”

Local teams heading to the post-season WNIT include Hofstra University, Marist College, Fordham University, St. John’s University and Army. The last two will face each other in the first round. Stony Brook University will play in the WBI.

The NCAA Tournaments for Divisions II and III are nearing their conclusions. Adelphi University, which had a brilliant season in which it was frequently ranked in the nation’s top 10, was upset in the first round of Division II, losing to Holy Family. Queens College is also out of the hunt for a national championship, losing to Stonehill College. Ending the Knights’ season on an optimistic look to the future, sophomore guard/forward Madison Rowland was named First Team, All East Region. In Division III, defending national champion Fairleigh Dickinson University-Florham Campus had a disappointing loss in the Elite Eight.