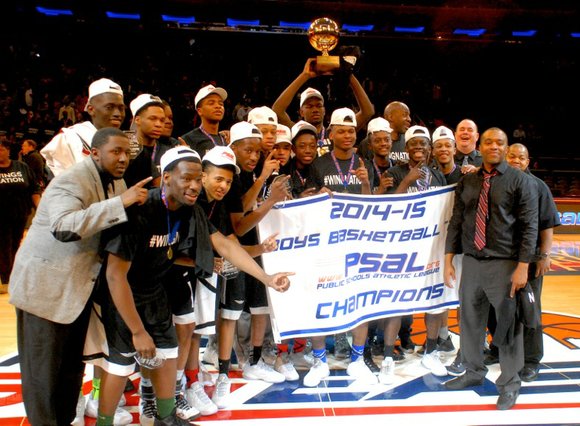 Wings Academy had much to celebrate after winning their first-ever Public School Athletic League, and what better place to do it than on the famed Madison Square Garden court? (Bill Moore photos)

A little under a month ago, Billy Turnage still felt the pain of one of the most heartbreaking losses of his nine-year tenure as head coach of Wings Academy.

“I don’t even want to think about it,” he said to a reporter, standing in the gymnasium of Eagle Academy 30 minutes before facing his Bronx rival. Wings’ 50-47 setback to Cardozo in the SNY Invitational at City College Jan. 24 was the epitome of snatching defeat from the jaws of victory.

Leading by nine points with three minutes remaining, Wings allowed Cardozo to execute a 12-0 run to end the game and bruise their collective psyche. “We just have to learn from that loss and use it as motivation,” Turnage rationalized.

Redemption couldn’t be any sweeter for Wings after capturing the school’s first PSAL AA city title at Madison Square Garden Saturday afternoon over Cardozo by an ironic score of 50-46—nearly the exact same digits as the January matchup.

Taking a 20-15 halftime lead over Cardozo, Wings nearly experienced deja vu when the Judges slashed the score to 45-43 late in the fourth quarter. But Turnage’s resourceful group, led by 6-foot-10 senior Jessie Govan, held off Cardozo and denied the Judges, last year’s city champs, their mission of repeating. Govan, who is headed to Georgetown to play for John Thompson III, was dominant with 17 points and 17 rebounds.