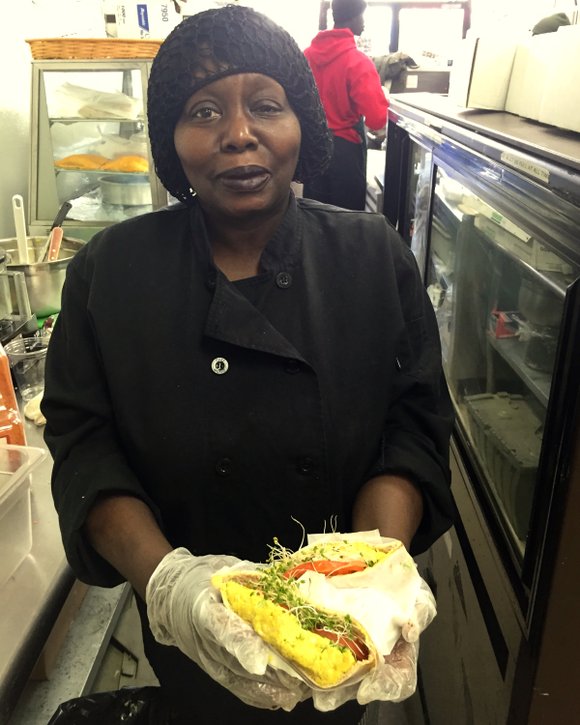 Last year, I attended a workshop at the Harlem State Office Building on entrepreneurship in Harlem. Many people I knew were there and even more that I didn’t. However, that didn’t stop Harlem’s unofficial-official “Eggroll Queen,” Angela Fuller, from introducing herself to me and inviting me to visit her kitchen to try her creations. Certainly intrigued, I put her name in my mental Rolodex and the eggrolls on my “to eat” list.

Time and space seemed both to get in the way of my visit and to reunite us at this year’s Harlem Hospitality and Culinary Conference at the Schomberg Center. Fuller and I saw each other, caught up and made a plan for me to come see what she does.

Two weeks later, I was off to Watkins Health Foods & Juice Bar (46 W. 125th St., 212-831-2955) on a sunny winter’s day to see and taste the eggrolls. I have been in Watkins many times before to get my favorite carrot-red pepper-lemon-ginger-cayenne juice at their popular juice bar, never paying attention to what I soon discovered was a vegetarian’s “fast food” respite in Harlem.

Fuller, donning her black chef’s coat, welcomed me in with a big smile and an eagerness to see what she has brewing in the limited space. I grabbed a nearby folding chair, watched, listened and ate. 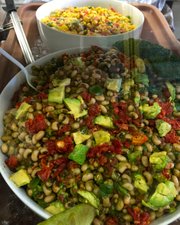 The menu often changes, but it is always fresh and mostly vegetarian, with the exception of some fish items. On this day, Fuller was showcasing apple kale salad with cranberries and sweet vinaigrette, crisp corn salad with bell peppers and vegan mayonnaise dressing and black-eyed pea salad with avocado, sun-dried tomato and basil pesto. The non-vegetarian selections were mock shrimp (made from fish) salad and a real salmon salad. All were colorful, inviting and satisfying.

But let’s be clear: I came for the eggrolls and Fuller did not disappoint. She started me with the original, the Japanese version, a large fried eggroll filled with cabbage, seaweed, baby carrot, snow peas, corn and other veggies, a nice vegetarian alternative to the traditional Chinese version. I asked what her best-selling eggroll was, and she hit me with the Mexican. Vegetable bean chili with real cheddar creates a hearty meal in a pocket that is spicy and delicious.

Fuller wouldn’t let me leave without a large piece of her freshly made vegan coconut cake. Although I couldn’t eat it, the discerning mouth that did was in shock when I disclosed it was vegan. Victory was mine!

Fuller has many other varieties of her eggrolls to try, as well as some cashew nut spread that looked like a meal in a pita. I hear a couple of tables are there now, so you can sit back and fully enjoy your food and/or juice and let Fuller show you what she can do.