Black art and the white gaze at the Brooklyn Museum 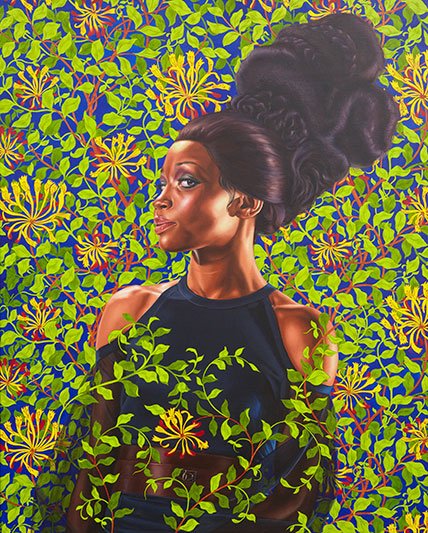 Patrons who appreciate art by and about Black people should make a bee-line to the top three floors of the Brooklyn Museum. Artwork from right now, the recent past and ancient history are on display via three sizable exhibitions. There is “Kehinde Wiley: A New Republic,” “Basquiat: The Unknown Notebooks” and the long-term installation on Egypt that includes a mummy chamber. There are other Black-centric exhibitions, including ones on the Black Arts Movement and African innovation, but the three aforementioned exhibitions are large and engaging.

Artist Kehinde Wiley is best known for paintings that feature contemporary, often urban, Black subjects in the context of “classic” European art. His work was prominently featured on the hit Fox television show “Empire.” For Wiley’s Brooklyn Museum debut, he offers up 60 works, including paintings and sculptures. The work tends to raise questions about race, class, gender and sexuality. One room of the exhibition features all women, including a magnificent sculpture called “Bound.” The busts of beautiful Black women are connected via thick and winding braids, locs and vines. It’s a powerful re-affirming image, as are most of the Wiley’s works. He forces you to look at contemporary Black America and acknowledge the depth and humanity that exists there.

Video by the Brooklyn Museum

The Basquiat exhibition is a bit jarring. It feels like one is peering into someone’s diaries or private thoughts. The center of this unique exhibition is a display of 160 notebook pages. The pages come from Basquiat’s stash of composition notebooks. Apparently, the late artist—he died at the age of 27 in 1988—preferred to do his sketches and write out poems and stories in ubiquitous and inexpensive black-and-white notebooks.

One can’t help but wonder if Basquiat ever wanted his drafts, sketches and writing bits to be seen by the masses. When I pass on to whatever happens after the last breathe, please burn all of my Moleskine notebooks with the hottest fire available. It feels intrusive, but it is also a rare glimpse into the mind and creative process of someone who has been hailed as an artistic genius. Taking in the Basquiat exhibit creates dual feelings of guilt (because if feels exploitative) and fascination because it is so rare to see the unfettered meanderings of a cultural icon.

If the Basquiat exhibit creates feelings that are equal parts guilt and fascination, the Egyptian exhibit takes that about 100 levels further. For centuries, Europeans have stolen mummies, jewels, statues and more from Egypt. Centuries old thefts by other countries have created amazing museum exhibits all over the world, including the treasures housed in the Brooklyn Museum. The provenance of these treasures—everything from mummies in pristine condition to intricately carved jewelry—is not in dispute, but the dastardly deeds done by some people at some point in the chain of custody is also not in dispute. It is a joy to take in the splendor, innovation and craft of an African culture that gave so much to the world. But unless you stumble upon these works during a visit to Egypt, it’s quite likely that you are enjoying the fruits of a long-ago heist.

So there you have Wiley with his visual bullhorn demanding that Black people be looked upon as just that, people. Then you have Basquiat, who was quite famous during his lifetime, and even in death we still pick and prod him to give us more. Lastly, the ancient Egyptians continue to outshine the cultures that came before and after them. All of these Black artists mentioned were/are doing purposeful work, and they all have different relationships with the white gaze. Perhaps most importantly, you can see them all right now at the Brooklyn Museum.