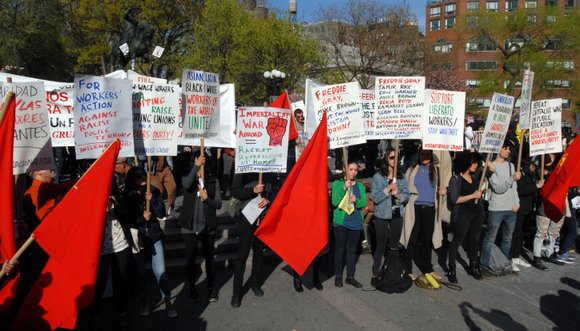 Given the current socially, politically and racially charged climate, it shouldn’t have surprised a soul that this year’s May Day rally in Manhattan took on more of an edge.

While celebrating and emphasizing the importance of labor rights, the rally included references to the #BlackLivesMatter movement, the Philippines’ attempt to break away from U.S. control, freeing Mumia Abu-Jamal, police brutality, the living wage and the Baltimore uprising.

One rally held in Union Square in the late afternoon was hosted by the May 1st Coalition for Worker and Immigrant Rights. As the protestors gathered and swelled into a crowd, one could see signs championing different causes. A young woman could be seen holding up a sign with the logos of CNN, CBS, Fox News, MSNBC and ABC over the line “Stop Reporting Half-Truth, Or Rather, The Wrong Half.” One man, while carrying his baby, could be seen holding up a sign featuring men of color who had been killed by police. An older white male held up a sign that read “They Rarely Shoot Old White Guys Like Me” with the words “White Privilege” underneath.

The protestors marched east on 14th Street, south on Second Avenue, Chrystie Street and eventually made their way to Foley Square but not before stopping at the site of the explosion in the East Village that led to the demolition of three buildings.

Along the way, people rallied in honor of Freddie Gray, chanting, “The whole damn system is guilty as hell,” followed by “Resist. Rebel.” By the time the rally got to Foley Square, tension increased between participants and cops. Some protestors were arrested after they tried to take their march from the sidewalk to the street. The rally ended up becoming more about police brutality and Gray about than workers’ rights.

Meanwhile, other rallies in the city included members of the Alliance for Labor Rights, Immigrant Rights and Jobs for All, along with labor unions and social justice organizations rallying against a perceived attack on social and economic justice and jobs.

This particular rally began at the house of billionaire Walmart owner Alice Walton. Workers and activists placed eight-foot tall plungers outside of her home on 60th Street and Park Avenue in protest of her “flushing away” jobs by recent store closings costing more than 2,000 people their jobs. Whereas the retail giant citied plumbing issues in those particular stores, workers claim it was part of grand ploy to punish workers for attempting to organize. Afterwards, the marchers made their way across Central Park South to Columbus Circle to join up with horse carriage drivers fighting for their jobs.

Henry Garrido, executive director of DC 37, spoke of the importance of the rally in a statement released before demonstrations began.

“Income equality is the eight-hour-day of our time—something workers need as badly today as they needed a humane work schedule back in 1886, when 400,000 workers, whose typical work day could last 10, 12 or 14 hours in unsafe, unhealthy workplaces, went on strike in Chicago,” said Garrido. “This year’s May Day comes amid a growing movement against the vast income inequality that is destroying our middle and working class, and for a living wage. DC 37 is proud to be part of the struggle.”

Hector Figueroa, president of 32BJ, used May Day to focus on labor issues and equality. “Today, the working men and women of New York City are joining workers around the world in a global call for justice and equality,” he stated. “We are airport workers, fast-food workers and other low-wage workers fighting for $15 and a union. We are families calling for immigration reform that allows us to stay together. We are communities calling for affordable housing and environmental justice. We fight for these rights on May Day and every day and still we rise.”