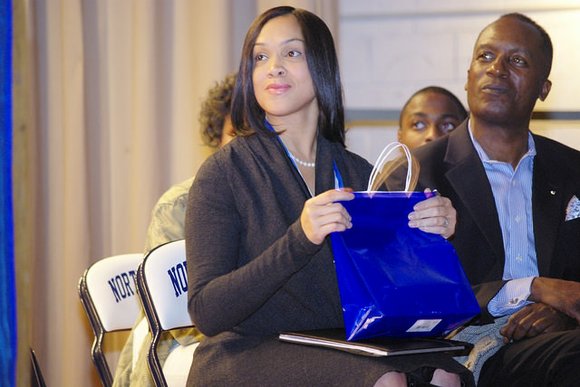 The announcement of the indictment of the six Baltimore police officers involved in the death of Freddie Gray by Baltimore City State’s Attorney Marilyn J. Mosby has shown us that the tenets of justice can work. During the press conference, Mosby explained that she filed charges against the officers on the basis of the autopsy and evidence gathered through her independent investigation after Gray’s death.

What is most unique and unusual from an elected official was Mosby’s promise to deliver on behalf of the people of Baltimore.

“To the people of Baltimore and the demonstrators across America, I heard your call for ‘no justice, no peace,’” Mosby said Friday. “Your peace is sincerely needed as I work to deliver justice on behalf of this young man. To those that are angry or hurt or have their own experience of injustice, I urge you to channel your energy peacefully.”

In New York, our elected officials have been playing political Hollywood shuffle when it comes to proper oversight and accountability of law enforcement or bringing indictments against police officers for the deaths of Black men.

A Daily News investigation found that at least 179 people were killed by on-duty NYPD officers over the past 15 years. Just three of the deaths have led to an indictment in state court. In another case, a judge threw out an indictment on technical grounds and it was not reinstated.

Brooklyn District Attorney Ken Thompson shocked the New York political circle when he announced that he would bring felony charges against NYPD Officer Peter Liang. Thompson said Liang did not intend to kill Akai Gurley while patrolling a darkened stairwell in the Louis H. Pink Houses Nov. 20, 2014, but that he failed to follow proper protocols before and after the shooting. In a statement on Thompson’s website, he says he is opposed to any independent investigator or prosecutor.

“Moreover, acts of police brutality are not only crimes against the individual victim, but also are attacks on the communities in which they occur. Therefore, local prosecutors who are elected to enforce the laws in those communities should not be robbed of their ability to faithfully and fairly do so in cases where police officers shoot, kill or injure someone unjustly. The people of Brooklyn have voted for their district attorney to keep them safe from all crimes, including those of police brutality. The attorney general’s proposal would override their choice—and that should not happen.”

Unfortunately, Thompson is a rare species among district attorneys when it comes to bringing charges against police in the state of New York. Daniel Donovan, the Staten Island district attorney and a Republican candidate for Congress, also felt there is no need for any special prosecutor, but he failed to secure an indictment in the Eric Garner case when an NYPD officer was captured on video allegedly using a prohibited chokehold. Furthermore, the medical examiner labeled the death of Garner a homicide.

In Westchester County, Black men can be shot, shot at or killed by police who never face an indictment. Instead, the district attorney is behind the curtain with the grand jury. In the killing of Kenneth Chamberlain, Westchester District Attorney Janet DiFiore said police officers used the word “nigger” as a tactic to distract and never considered it to be a “hate crime.”

Two police officers only received eight weeks and six months worth of weekends in jail for lying on search warrants that led to Jamar Smythe serving four years in jail and for the questionable death of Dario Tena. DiFiore has yet to have a formal investigation in the death of Tena, who died in the custody of the lying officers.

In Gov. Andrew Cuomo’s history, even as the state’s attorney general, he has never intervened as an independent body or brought any indictments against police officers. Even from victims’ families, law enforcement reform groups, criminal justice experts and many New York taxpayers, the demand for an independent special prosecutor has fallen on the deaf ears of the governor.

Unfortunately, even when municipalities recognize the need for transparency, Cuomo and our state legislators have ignored the call. A letter dated May 29 and signed by the entire City Council of Newburgh, N.Y., was the response to the death of Michael Lembhard, a 22-year-old killed in 2012, during a confrontation with police. The council’s letter claimed that a close working relationship between police and prosecutors undermines the credibility of the district attorney’s investigation.

“It does not matter that the DA’s office does an outstanding job of investigation; the results will not be trusted. By definition, the relationship causes a conflict of interest,” the letter said.

Cuomo denied the council’s request for a special prosecutor.

New York Attorney General Eric Schneiderman has stated that his office can play the role as an independent investigator and prosecutor. As a national organization of law enforcement professionals, we have a problem with his offer.

Schneiderman is in his second term; he and his office have remained silent on the many shootings of Black and Brown men and women under his watch. The attorney general’s office has had several high-profile cases that were national news before the Garner case, many with requests for independent investigators from families of victims of police criminality. If Schneiderman is sincere in his offering, he should open up all cases of incidents of questionable police actions and shootings that have already happened under his watch as attorney general. If not, his offer is just political symbolism without any substance.

Mosby took a proactive stance for the tenets of justice and launched an independent investigation. She came to the conclusion to indict the officers. This action is the first step for justice for Gray’s family. It also shows that the tenets of justice can work when you put people before politics.

Should Black people truly start considering not voting for these elected officials when you can’t even get true social justice? Are Black lives not important enough to New York politicians to pass comprehensive legislation of police oversight? Only time will tell.

Damon K. Jones is the New York representative of Blacks in Law Enforcement.