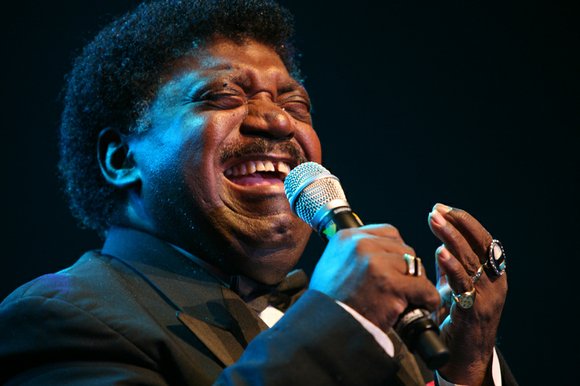 Percy Sledge, the blues and soul singer who had both men and women unconsciously committed to singing the lyrics to his hit song “When a Man Loves a Woman,” died in Baton Rouge, La., April 14. He was 74.

It was the heartfelt pain in Sledge’s voice that led to its soulful authenticity and emotional grief. They call it soul, but it was laid with the blues, as Sledge wailed out the pleading lyrics inspired by his girlfriend leaving him and losing his construction job. “I didn’t have any money to go after her, so there was nothing I could do to get her back,” Sledge later recalled regarding the song’s origins.

The song was the first hit out of the Muscle Shoals, Ala., music scene. The instrumentalists that accompanied Sledge were the organist Spooner Oldham, drummer Roger Hawkins and guitarist Marlin Greene. These musicians became the Muscle Shoals sound, which became the town’s signature groove. Such performers as Aretha Franklin, Keith Richards, Jimmy Cliff and Mick Jagger flocked to the town’s studio to get that funky soulful groove.

“I hummed the melody all my life, even when I was picking and chopping cotton in the fields,” the singer later told the Rock and Roll Hall of Fame.

At the time of the recording, Sledge was working as a hospital orderly, picking up gigs at night with a group called the Esquires Combo. It was a hospital patient who introduced him to the record producer Quin Ivy.

Out of gratitude, Sledge gave his songwriting credit for “When a Man Loves a Woman” to his Esquires bandmates, the bassist Calvin Lewis and the organist Andrew Wright, who helped him with a few chords. Since he was not listed as a co-writer, Sledge never received royalties.

“Worst decision I ever made. But I am not at all bitter,” he told Blues and Soul magazine, noting that he was only 25 at the time. “It was God’s will for me to give it to them. But if I had my time again, I wouldn’t do it. Because of my children.”

Sledge personally sang the song at the wedding ceremony for musician and actor Steve Van Zandt. The song turned up in movies including “The Big Chill,” “The Crying Game,” “Platoon” and the 1994 Meg Ryan drama named for the song’s title. Michael Bolton’s cover version in 1991 hit No. 1 on the Billboard chart and earned him a Grammy Award.

The singer toured consistently from the Apollo Theater to his international following in the Netherlands, Germany, Jamaica and Africa.

Percy Tyrone Sledge was born Nov. 25, 1940, in Leighton, Ala., a small farm town where he sang in the church choir

His wailing soul vocals were a combination of gospel choir experience and his experience in the cotton fields, which was nothing but the blues and soul. He once stated, “I was singing every style of music: James Brown, Wilson Pickett, Motown, Sam Cooke and the Platters.”

Like Sledge’s gap-toothed smile, he was original; there was no pretention, just a young man from the country with a soulful sound that rocked the world. He was the sound of soul, the blues, gospel, country and R&B. He was an original soul man.

Sledge was honored with the Rhythm & Blues Foundation’s Career Achievement Award in 1989 and was inducted into the Rock and Roll Hall of Fame in 2005. His final album, “The Gospel of Percy Sledge,” was released in 2013.

Sledge is survived by his wife, Rosa Lee Sledge, and 12 children.