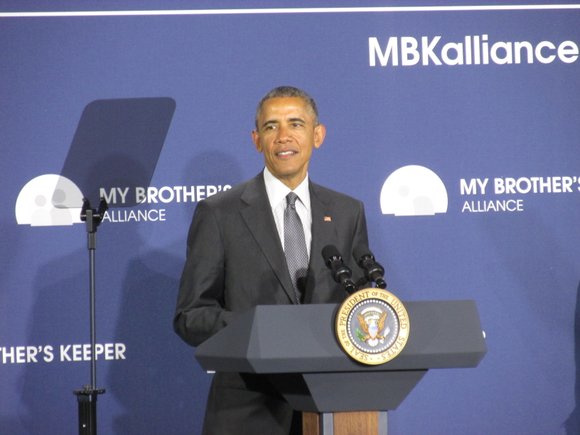 President Barack Obama delivered remarks at an event launching the My Brother’s Keeper Alliance at Lehman College in the Bronx Monday.

The MBK Alliance is a new independent nonprofit organization aimed at eliminating opportunity and achievement gaps for boys and young men of color.

According to the White House, boys and young men of color represent nearly 50 percent of all males under 18 and are one of the fastest-growing population segments. Only 20 percent of African-American, Asian and Hispanic teens are currently able to find jobs.

Obama launched the My Brother’s Keeper Initiative in 2014 to support mentoring and access to community resources for young men of color.

“Some have had the odds stacked against them,” he said. “It’s true for people of color, especially boys and young men. Those opportunity gaps begin early, often at birth, and they compound over time.”

The president announced $80 million in commitments to fulfill the goal of the MBK Alliance. Companies participating include Sprint, PepsiCo, American Express, Johnson & Johnson and BET.

The MBK Alliance is proposing that corporations implement several practices to diversify their companies. With help from the National Employment Law Project, recommendations include delaying all conviction inquiries until after a conditional offer of employment, career exploration programs and job shadowing.

“All these youth are part of our workforce,” Obama said. “If America is not operating at full capacity, that hurts all of us. It’s about more than economics; it’s about values.”

Sprint CEO Marcelo Claure has joined the board of directors of the MBK Alliance. The company pledged $2 million and approximately $3 million of in-kind donations to expand the availability of broadband resources for students who need access to a wireless network.

Sprint and the MBK Alliance will partner to provide Internet access to New Jersey public school students of color for their after-school, weekend and summer programs.

“We are honored to welcome Mr. Claure to the MBK Alliance board of directors,” said Joe Echevarria, MBK Alliance chairman. “His leadership, entrepreneurial spirit and commitment to serving and inspiring young adults will be instrumental in our success.”

Before the speech, Obama held the roundtable discussion with the young men about their experiences. Singer John Legend was at the discussion. He is also on the board of the MBK Alliance.

“If you have any doubt about the future of America, you need to get to know these young men,” he said. “Schools don’t seem invested in their success. These guys are succeeding, have mentors, opportunities for community service, getting involved in community.”

NAACP President and CEO Cornell William Brooks said he applauds Obama’s creation of the MBK Alliance because it ensures the sustainability of the programs created well after Obama’s term in office ends.

“As our nation begins to address the unrest wrought by racial profiling in cities like Ferguson, Cleveland and Baltimore, the NAACP looks forward to working collaboratively with My Brother’s Keeper Alliance to ensure that all young men of color are maximizing their full educational and professional potential,” Brooks said.