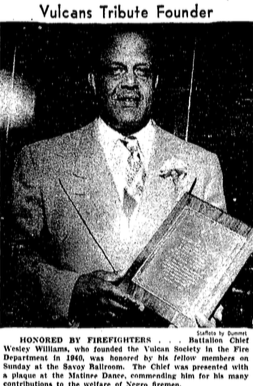 It has taken Ginger Adams Otis nearly a decade to complete her book “Firefight: The Century-Long Battle to Integrate New York’s Bravest” (PalgraveMacmillan, 2015). Otis, a reporter with the Daily News, builds her compelling narrative on Wesley Williams, who, in 1919, became the city’s first African-American firefighter.

Fortunately, Williams was highly literate and left behind a trove of letters and even a few speeches as a ballast to Otis’ study, and this was bolstered by family held memorabilia as well as a richly rewarding thesis by historian David Goldberg.

But it’s Otis’ diligent and meticulous research that burnishes this untold story, and she more than meets the challenge of filling in the historical gaps between Williams’ arrival at Engine 55 just months before the nation experienced a paroxysm of racism that came to be called “The Red Summer,” and the emergence of today’s Vulcan Society.

“He’d expected his first days to be challenging, and they were,” Otis writes of Williams’ arrival at the firehouse in Little Italy, where an all-white crew “welcomed” him. “The silent treatment continued, but nobody, save the captain, had been as openly antagonistic as he feared. Nobody had tried to hit him yet.”

After a racial slur by one of the firemen, Williams felt he had endured enough harassment and intimidation. He challenged the name caller to a boxing match in the firehouse’s basement—a customary way of settling disputes in the company. When Williams was the first to emerge, indicating his victory, the other firemen were shocked.

They were unaware that Williams had been given lessons by the great boxer Sam Langford. “Boy, you’re going down to work with the Irish. You’re going to need to know how to fight,” Langford told him bluntly. “You’re going to get lessons from us.” Those lessons were more than sufficient, and nobody else dared challenge him with their fists. Williams had scored 100 percent on his entry exam and a knockout of a racist colleague.

Even so, the fisticuffs victory provided only a temporary halt to the negativity that surrounded him. However, Williams was undaunted and fulfilled his mission as a firefighter, to say nothing of his bravery that was not saluted.

Otis vividly recounts his days in uniform. In chapters titled in fiery metaphors, she moves the reader across the years, citing the accomplishments of other Black firemen, such as Arnold Joel and Edward Bantry, and particularly Vincent Julius, Jim Lee, Michael Marshall and Paul Washington—stalwarts in founding the Black firemen’s Vulcan Society. When Williams received his promotion to lieutenant in 1927, it marked the end of an era and the beginning of another. And though Williams’ firehouse nemesis John O’Toole was no longer around, there was still a mountain of obstacles for Black firemen to overcome, and Otis devotes the last third of the book to the modern period.

There are so many interesting and intriguing ways to tell portions of New York’s action-packed history, but seeing it through Otis’ vision and the odyssey of Black firemen is a unique perspective. One day I was walking my students up 135th Street in Harlem and one of them wanted to know who Wesley Williams was, since his name was emblazoned on the street sign. At that time, my rambling account could have used “Firefight,” and it will be a useful reminder for others who want to know more about this pioneering fireman and some of the city’s flames he helped douse.