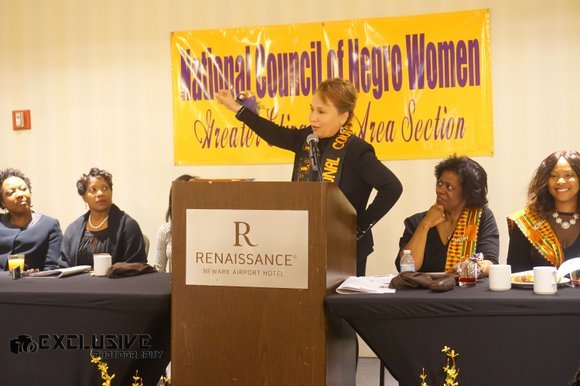 Alexis Herman never forgot the lessons her grandmother taught her as she was growing up in the segregated South. Margaret “Pitt” Dozier, the matriarch who lived until age 105 and had an eighth-grade education, told Herman to make a difference wherever she went in life.

“Lex, bloom where you are planted,” Herman recalls her grandmother saying.

She didn’t let her grandmother down. Herman became the 23rd U.S. secretary of labor, the first and only African-American to hold this position. Appointed in 1997 by President Bill Clinton, Herman was instrumental in establishing the Family and Medical Leave Act of 1993. Before that appointment, she was a director of Public Liaison for the White House and a director of the Women’s Bureau during President Jimmy Carter’s administration. As a member of the president’s Cabinet, she also served on the National Economic Council.

“My life was shaped by five guiding principles,” said Herman during the 10th annual Harambee Breakfast and Awards Ceremony. This event was sponsored in New Jersey by the National Council of Negro Women Greater Elizabeth Area Section, March 14. At age 13, Herman joined the NCNW’s youth section in Mobile, Ala. She stayed connected to the council, which was formed in 1935 by educator and civil rights leader Mary McLeod Bethune.

The event’s theme, “Creating a Path to Success,” gave Herman an opportunity to share a few principles with more than 300 attendees: concentrate on your gifts, keep learning, stay abreast of current issues and build stronger communities.

Newark resident Bessie H. White said, “It’s always good to hear from people who have been successful and who are willing to share it with others.” White, who retired from Newark Public Schools, was reminded to seek ways to enjoy life and help young people prepare for leadership positions.

Herman learned about leadership, public service and perseverance from her father, Alex Herman, one of the first Black men elected to political office in Alabama, and her mother, a teacher. Dorothy I. Height, civil rights activist and a former president of NCNW, was Herman’s mentor.

That example is part of NCNW’s empowerment mission, said podiatrist Patricia Bennett, who is a senior advisor of NCNW’s Greater Elizabeth Area Section, founded by Joann Blount. “The purpose of NCNW is to honor the plight of Black women, their families and their communities,” said Bennett. “Secretary Alexis Herman reminds us to never forget our roots, to know our history. Keep your eyes on the prize. Don’t forget your roots because you will be reminded that the struggle continues.”

Acknowledging existing challenges in the Black community, Herman presses on toward progress. Her contributions include serving as chair and CEO of New Ventures LLC in Washington, D.C., as a National Urban League trustee, as an executive board member of Delta Sigma Theta Sorority, as president of the Dorothy I. Height Educational Foundation and as a member of numerous task forces and corporate boards.

Herman’s accomplishments are impressive. Yet, she is proud of something that happened during the start of her career. As a social worker, she helped “out-of-school young Black males” find jobs in Alabama’s shipyards. “I knew nothing about the plight of unemployment in my community until I really began that work,” she explained. “That is what really opened my eyes to the economic empowerment of our people. It put me on the path that I’m on today. It put me on the path of always trying to find ways to help our people find jobs, to find ways to better themselves economically.”

She added, “That first experience taught me that we have to expose our children, educate our children, and inculcate in them a desire to achieve excellence. That’s something that Dorothy Height did for me.”

“It’s no question,” she concluded.“Early on with my grandmother and as I matured into a young lady, it was Dorothy Height who really guided my career.”

Indeed, Alexis Herman blooms wherever she is planted.