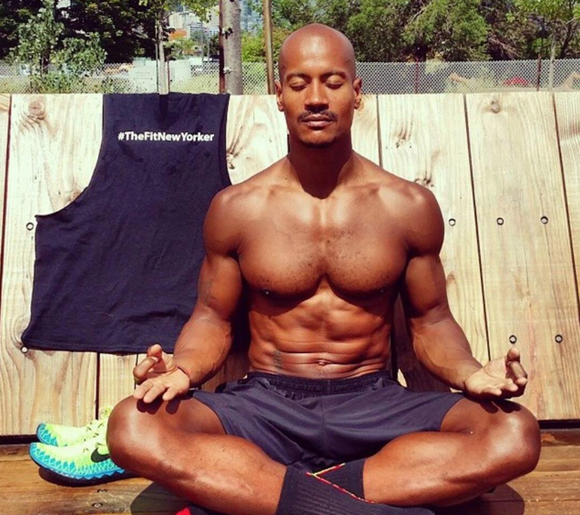 At 6-foot-5 and a chiseled 230 pounds, Max Tapper’s own body is perhaps the best advertisement for his personal training business. The Brooklyn native has been doing one-on-one personal training for quite some time, but for the past year, he has been sharing his love and knowledge of fitness with groups of people in Central Park.

“When I do my private training sessions, that can cost $200. Everybody doesn’t have the resources to do that, and I wanted to offer something more accessible and affordable. So the Fit New Yorker training sessions are just 20 bucks,” said Tapper. “I don’t do the whole mean drill sergeant thing. The Fit New Yorker sessions are 45 minutes to an hour of fun, laughter, yelling and sweating. People leave feeling good about themselves.”

Growing up, Tapper wasn’t always so in tune with his body. He was already 6-foot-2 at 12 years old, and he graduated high school at 16. By the time he got to college at Temple University, he was one of the tallest and youngest guys on campus. During a lifting session, Tapper had an embarrassing moment.

“I was one of the bigger guys, but I couldn’t really lift. I had back issues and not much upper body strength at the time. From then on, I decided I needed to make some lifestyle and fitness changes,” noted Tapper, who started out wanting to be a chiropractor but switched lanes to fitness.

Fast-forward to Tapper graduating college and heading back to New York. While working out at Chelsea Piers, a Playboy editor spotted Tapper and asked if he would like to appear in the fabled men’s magazine.

“At first, I wasn’t too sure about doing Playboy, but it turned out to be a nice fashion spread and that really jumpstarted my career. I got my first agent from doing that spread,” said Tapper, who went on to book numerous noteworthy modeling and acting gigs, including a recurring role on the daytime soap “One Life to Live.”

Tapper is currently working on a television project called “The Fit New Yorker,” which will bring some of his fitness tips and clients to the small screen. Right now, you can catch a glimpse of his work on an even smaller screen—your cellphone. Tapper regularly updates his Instagram feed (@maxtap1) with pictures and videos from his own workouts and his Central Park group fitness sessions. He also posts short motivational speeches and a peek into his own workout and dietary habits. Tapper says he works out four days a week (not including his Saturday sessions at the park) and sticks to a gluten-free diet that is partly because of his allergies.

“My basic meal is protein in the day. I’ll have something like tuna, grilled vegetables, brown rice. I also do sweet potatoes. I’m a lean eater. I do drink alcohol, but when I do drink, it’ll be tequila or something else straight. I don’t want the big sugary mixed drinks,” said the 38-year-old. When Tapper is not working, he’s likely traveling or with family. He has an 8 and a half year old son, who is Tapper’s greatest motivation.

To sign up for Tapper’s Fit New Yorker sessions, held on Saturdays at noon in Central Park, email to TheFitNewYorker@gmail.com.