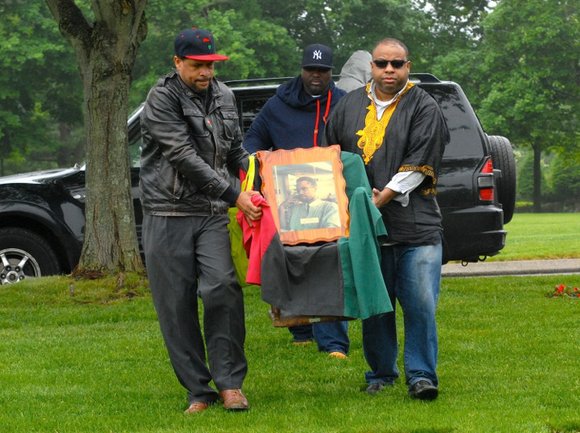 The celebration of what would have been the 90th birthday of slain international activist Malcolm X began with hundreds making the pilgrimage to the Ardsley gravesite, where the man also known as El-Haj Malik El-Shabazz is interred with his wife, Dr. Betty Shabazz. Much to the delight of the organizers, including professor James Small and Reggie Marbry, young grade schoolers and even kindergarteners almost outnumbered the adults who took part in the interactive celebration at Ferncliff Cemetery.

Upon return to Harlem, the participants joined with the December 12th Movement, which had requested that stores on the retail-hectic 125th Street corridor close in respect for Malcolm X. Although in past years the closure was all-day long, it is now from 1 p.m. to 4 p.m. Most stores complied, but U.S. Polo and Red Lobster were lambasted by protestors for refusing to close. The seafood spot eventually complied, and, like Chase Bank, McDonald’s and Modell’s, the corporate store honored the community request.

Later, at the Adam Clayton Powell Jr. State Office Building, the December 12th Movement organized a program in which attendants were asked if they wanted a plebiscite on the role of government. They presented possible solutions such as the establishment of the Republic of New Africa and the option of international relocation.

At the refurbished Audubon Ballroom—now the Malcolm X and Dr. Betty Shabazz Memorial and Educational Center—the Shabazz family and their attorney, L. Londell McMillan, hosted a praise and joy-filled, open mic party in honor of the 90th birthday and 50th anniversary of the passing of El-Haj Malik El-Shabazz.