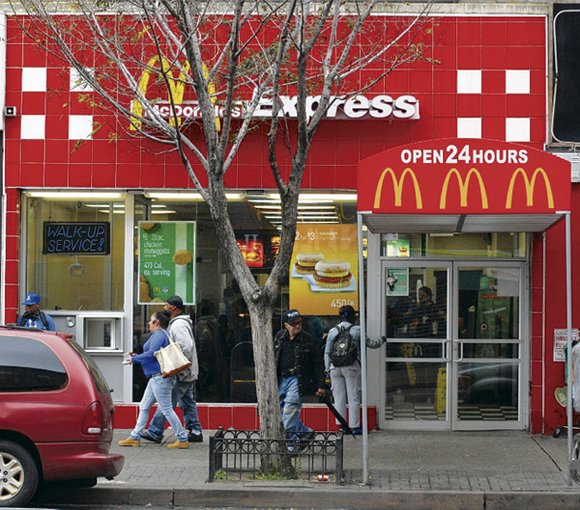 Last week, 5,000 McDonald’s workers made their way to the company’s headquarters in the largest ever protest at the annual shareholder meeting.

Cooks and cashiers voiced their anger over a lack of increase in wages that forces them to rely on public assistance. The workers feel more driven than ever with potential wage increases to $15 in big cities such as Los Angeles and New York City. Marchers walked behind a large banner that read “McDonald’s: $15 and Union Rights, Not Food Stamps.”

“We’re here to tell McDonald’s and its shareholders to invest in the company and its workers instead of wealthy hedge fund managers and executives,” said Kwanza Brooks, a Fight for 15 National Organizing Committee member from Charlotte, N.C., in a statement. “We’re tired of relying on food stamps to feed our own families. We need $15 and the right to form a union, and we need it now.” Brooks is paid $7.25 an hour.

The protest kicked off what were two days of action at the shareholder meeting, where protestors delivered 1 million petition signatures calling on the fast-food conglomerate to raise wages and respect workers right to organize. Last year, McDonald’s workers held a sit-in at the company’s shareholder meeting. Authorities arrested 101 workers.

Speaking from a stage at the protest, other workers and union leaders gave their personal experience with low wages and what they feel needs to be done.

“We’re here to make it clear to McDonald’s that we want $15 and union rights. We don’t need food stamps, and we definitely don’t want buybacks,” said Adriana Alvarez, who has worked at McDonald’s in Chicago for five years but still needs food stamps, child care subsidies and Medicaid to support her 3-year-old son because she’s paid so little.

“It’s time for McDonald’s to respect the workers on the front lines as much as they have respected shareholders by putting $30 billion in their pockets over the last 10 years,” said SEIU President Mary Kay Henry.

In May, in a paper published in the Harvard Business Review, William Lazonick, a University of Massachusetts Lowell economist, with two co-authors, wrote about the nearly $30 billion McDonald’s spent on buybacks this past decade. Lazonick and company argued that McDonald’s should spend that money raising workers’ wages or invest it in the company instead of manipulating the stock price. The paper felt that would be a better long-term approach.