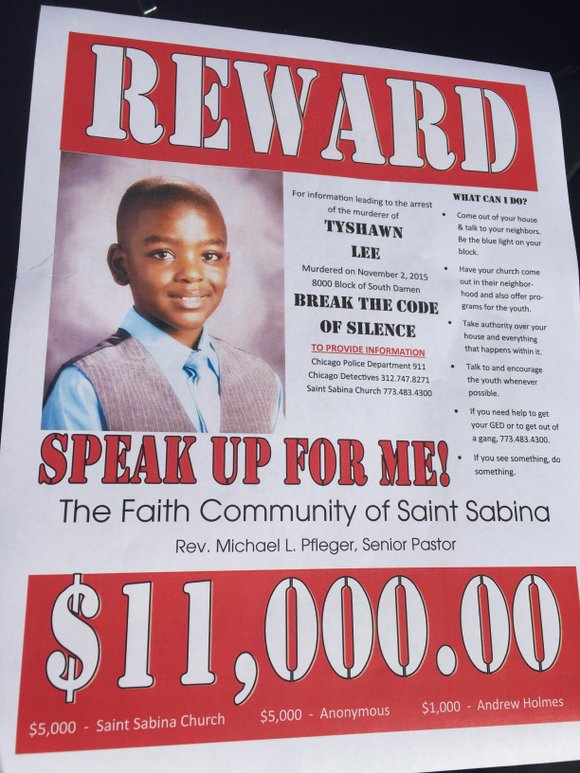 Chicago churches are offering an $11,000 reward for information leading to the arrest of the murderer of 9-year-old Tyshawn Lee. Full credit - The Faith Community of Saint Sabina

(CNN) -- A 9-year-old boy was shot and killed Monday in Chicago and police say it isn't clear whether the child was targeted or was in the wrong place at the wrong time.

Tyshawn Lee loved to play basketball and video games, his family said. On Monday he was in an alley in the Gresham neighborhood, according to Chicago police. Witnesses said an argument broke out and that's when the boy was shot.

Tyshawn was hit multiple times in his upper body and died in the street, authorities said.

Investigators haven't been able to discern a motive for the slaying, Chicago police detective Dean Andrews said at a news conference, adding, "We will be working around the clock to find out more."

A small memorial with stuffed animals and a basketball appeared Tuesday in the alley where the boy was killed.

As detectives canvassed the area and interviewed neighbors, saddened and outraged residents were determined to do what they could.

Some handed out flyers asking anyone with information about Tyshawn's killer, to contact police. The flyer said a reward would be given.

Longtime Chicago social activist and priest Father Michael Louis Pfleger told CNN that donations for that reward had reached $17,000 as of Tuesday afternoon.

Tyshawn's death happened on the same day that Democratic presidential candidate Hillary Clinton met in Chicago with parents whose African-American children have died in shootings.

The Chicago Tribune allows readers to compare violence in each neighborhood and updates shooting incident data several times a week. As of Tuesday, 2,578 had been shot since January 1, 2015.

September was the deadliest month since 2002 for gun violence, the newspaper reported. The city recorded 60 homicides that month.