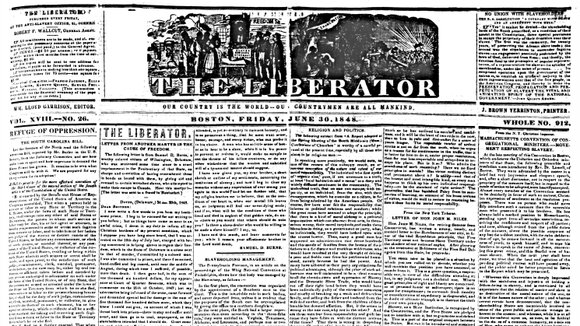 Delaware Division of Historial and Cultural Affairs Burris wrote a letter while he was jailed in Dover, Delaware. Eventually, the letter was published in The Liberator, a famous abolitionist newspaper of the day. Burris never took his freedom for granted, writing that "the lowest condition in life, with freedom attending it, is better than the most exalted station under the restricts of slavery."

(CNN) -- More than a century before the Rev. Martin Luther King Jr. wrote his famous open letter from the Birmingham jail, another incarcerated champion of civil disobedience penned a powerful missive against racial injustice.

Samuel D. Burris, a free black man, railed against those who enacted laws that allowed slave traffickers to conduct business freely in Delaware.

"They uphold and applaud those slave traffickers, and those inhuman and unmerciful leeches, in their soul-damning conduct, by making the colored people legal subjects for their bloody principles to feast on," wrote Burris, who was languishing in a Dover jail, in a letter published in a June 1848 edition of The Liberator, an abolitionist newspaper.

On Monday morning, Delaware's governor officially pardoned Burris, an Underground Railroad "conductor" who today is considered a hero for helping escaped slaves find their way to freedom. Burris had been convicted of enticing slaves to freedom.

Gov. Jack Markell signed the document in the Old State House, the same building where Burris was tried. The ceremony came on the 168th anniversary of the date Burris was convicted.

Markell, surrounded by Burris descendants as he signed the pardon, said the action righted a wrong and was part of the healing process for Delaware.

"It recognizes Mr. Burris' acts not as criminal acts but acts of freedom and bravery in the face of injustice," he said.

Burris' courage is particularly notable because, unlike the white abolitionists with whom he worked, the father of five children and husband to Catherine could be sold into slavery for his actions. He eventually was ordered to be sold into servitude, or slavery, for two periods of seven years each.

"The man put his life on the line and the life of his family on the line to do work that was illegal at the time," said Robin Krawitz, a Delaware State University historian writing a book about Burris. "We can look back and say that our system was wrong. He was not wrong; he was practicing civil disobedience."

A white abolitionist posing as a slaveholder purchased the inmate for $500 and eventually spirited him away to safety and to his family in Philadelphia. Burris, undeterred even after having spent 14 months in jail, for a time returned to Delaware and continued to participate in the Underground Railroad.

The pardon was the result of a grass-roots effort that quickly gained traction this year. Among those who lobbied for it are Ocea Thomas, an Atlanta descendant of Burris, and Robert Seeley, who said his ancestor, a white Quaker, helped 2,700 people, including Harriet Tubman, to freedom.

Thomas says when she recently received a call from the governor's office about Markell's decision, she was "overwhelmed with pride" and happy for Seeley, Krawitz and Bev Laing, a state historian who did extensive research on Burris.

Krawitz and Laing, who have researched Burris' life for nearly 20 years, speak glowingly of their subject's selfless actions, faith and moral character. The pardon is bringing more attention to an individual and a chapter in American history about which many know little.