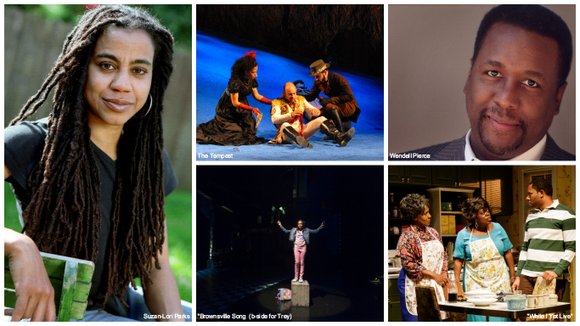 In the solo performance category, numerous actors received a nomination, including Keith Hamilton Cobb for “American Moor” from the Phoenix Theatre Ensemble, Dael Orlandersmith for “Forever” by the New York Theatre Workshop, J. Alphonse Nicholson for “Freight: The Five Incarnations of Abel Green,” from StreetSigns Center for Literature and Performance and New Dog Theatre Company, Rain Pryor for “Fried Chicken and Latkes” from the National Black Theatre and Phil Darius Wallace for “Self Made Man: The Frederick Douglass Story” from Derek Yip and Nikita Productions.

Several productions are nominated in one category. “Rasheeda Speaking” from the New Group has a nomination in the lead actress category for Tonya Pinkins. “R+J: An Uncivil Tale” from Rebel Theatre Co. is up for choreography, Rajendra Ramoon Maharaj. “Most Dangerous Man in America (W.E.B. DuBois)” from the New Federal Theatre is up for costume design, Gail Cooper-Hecht. “Fences” from the Morningside Players is up for best revival. “Dancing on Eggshells” from the Billie Holiday Theatre is nominated for choreography, Traci Tolmaire. “Black Wall Street” from Shades of Truth Theatre and Voza Rivers New Heritage Theatre Group is nominated for set design, Chris Cumberbatch.

In addition to the nominations for these productions, AUDELCO will also be presenting awards. Pioneer Awards will go to Bernard March, Sandra Reeves Phillips and Rudolph Shaw. Board of Directors Awards will be presented to Darlene Gidney, Toni Peterson and Leon Pinkney. A Special Achievement Award will go to BAYO and Nia Productions (Les Ford), and I must humbly state that I will be receiving a special Lifetime Achievement Award for my 30 years and counting as a theater critic.