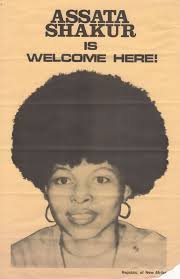 Revolutionary activists have designated Nov. 2 “Assata Shakur Liberation Day,” marking the anniversary of one of the most courageous stances against U.S. tyranny in recent memory. On this date, in 1979, Assata Olugbala Shakur (s/n Joanne Chesimard) was sprung from the Clinton Correctional Facility for Women, a concentration camp in Union Township, N.J.

Despite some reports stating forensics evidence established that she did not touch any of the guns found at the scene and that the median nerve in her right arm was severed when she was shot, rendering it useless, Shakur was convicted March 25, 1977, of the first-degree murders of her comrade Zayd Malik Shakur and state trooper Werner Foerster, who were killed on the New Jersey Turnpike May 2, 1973. She was also convicted of several other related charges and sentenced to life.

On that tragic night, at approximately 12:45 a.m., Assata Shakur, Sundiata Acoli and Zayd Malik Shakur were pulled over in East Brunswick for an alleged faulty taillight. Shortly thereafter, Zayd Malik Shakur and Foerster lost their lives in a fierce gunfight, which left Assata Shakur and trooper James Harper seriously wounded. Acoli was later captured nearby, unscathed.

From 1973 to 1977, Shakur became synonymous with “falsely accused” after being indicted on a slew of dubious charges, ranging from armed robbery, attempted murder and bank robbery to kidnapping and murder, resulting in three acquittals and three dismissals.

“Assata was falsely charged on numerous occasions in the United States during the early 1970s and vilified by the media,” stated fellow Panther Angela Davis.

After she had been terrorized and tortured behind bars for six years, three Black Liberation Army comrades visited their “revolutionary mother hen” Nov. 2, using bogus IDs and Social Security cards to gain entrance. Once inside, they brazenly brandished concealed pistols, seized two guards and commandeered a prison van to flee the premises. They switched vehicles a few miles away and completed their escape without injury. The two hostages were released unharmed.

The FBI immediately launched a massive hunt, circulating wanted posters and raiding many Panther locations, to no avail.

Numerous “Assata Shakur Is Welcome Here” posters were highly visible throughout Black communities in the metropolitan area in response.

In July 1980, frustrated FBI director William Webster claimed that efforts to determine Shakur’s whereabouts were futile because of citizens’ refusal to cooperate.

Assata flew under the radar for several years before surfacing in Cuba in 1984, where President Fidel Castro granted her political asylum.

“They wanted to portray her as a terrorist, something that was an injustice, a brutality, an infamous lie,” Castro stated in a May 2005 television address, labeling her a victim of racial persecution.

“Assata: An Autobiography” was published in 1987, detailing her accounts.

Throughout the years various law enforcement agencies and politicians have called for her extradition to the U.S. on May 2, 2005, the FBI classified her as a “domestic terrorist,” and increased the reward for her capture to $1 million. In 2013, Shakur became the first woman added to the FBI’s Most Wanted Terrorists list, and the bounty for her capture was doubled to $2 million.

“It is unacceptable to me as governor to have any flights between New Jersey and Cuba until and unless convicted cop killer and escaped fugitive Joanne Chesimard is returned to New Jersey to face justice,” Christie wrote to Port Authority Chief John Degnan. “I will not tolerate rewarding the Cuban government for continuing to harbor a fugitive.”

Original Black Panther, Brother Tarik countered, “American officials’ position regarding airplanes taking off and landing on American/Cuban soil will have no impact … Hands off Assata!”