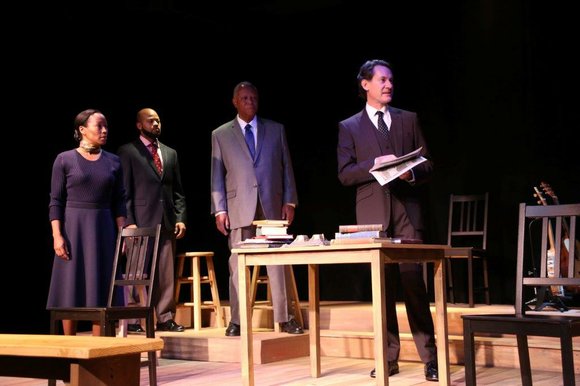 The music directors are the drummer Winard Harper and the pianist Danny Mixon. Proceeds will support Jazzmobile’s education programs. For a complete listing and tickets, visit www.jazzmobile.org.

The most important play of this season is “In White America,” at the Castillo Theatre (543 W. 42nd St.), now through Nov. 15. In its two-hour running time, you will witness the callous shadow that has shaped American history from slavery to the presidency of Barack Obama.

“In White America,” directed by Charles Maryan, is a theater piece that consists primarily of letters, speeches and transcripts of conversations and congressional hearings that took place from 1788 to 1957. The six cast members are JoAnna Rhinehart, Art McFarland (former longtime reporter with WABC-TV), Ezra Barnes, Nalina Mann, Bill Tatum and Shane Taylor, along with guitarist Bill Toles, a one-man musical accompaniment providing percussions and songs.

“Whether it was a character with one line or a two-page monologue, it was important to me that they each were fully realized, multidimensional beings,” stated Shane Taylor.

Rhinehart presented a multilayered performance filled with sadness, eagerness and anger as she reflected on the first day of school (from that morning to her arrival) for Elizabeth Eckford, the 15-year-old girl who integrated Central High School in Little Rock, Ark., in 1957.

Woodie King Jr.’s New Federal Theatre is producing “In White America,” which is celebrating its 50th anniversary. It was originally produced in 1963 in the fiery time of the Civil Rights Movement. The writer Martin Duberman, who was present at this recent performance, says he was happy to see the production’s revival at such a crucial time in America.

“This work brings significant meaning to the Black Lives Matter campaign. The belief goes back to slavery,” said King. “We are honored to be a part of this production.”

As the play’s moving journey of America depicts, Black lives never had any meaning to their white slave owners. By law they were property and were treated as such. From 1859 to as late as 1955, more than 5,000 Black people (men, women, and children) were lynched in America. Lynchings were considered community justice by white folks. That white supremacy activism lingers today through institutional racism and political resistance.

For 400 years, African-American lives and their civil rights didn’t matter, although abolitionists such as Sojourner Truth and W.E.B. Du Bois and generations that followed have fought and given their lives in the name of equality and the fact that Black lives do matter. The slogan’s concept is much deeper than police officers shooting unarmed victims.

“This production, unfortunately, has proven to be timeless,” said Toles. “But it is a good history lesson and humanizes some of our great Black heroes.”

After 50 years, “In White America” still plays like a John Coltrane tune, engaging you in the moment. You feel the heat in the crowded hall as Marcus Garvey speaks. During a narrative, you are moved to the bowels of a slave ship. The abuse is inhuman, and conditions are so abominable you want to regurgitate and kill the shipmate.

Such images bring to mind the campaign slogan of presidential candidate Donald Trump: “Make America Great Again.” Those “great” opportunities were missed such as after the Emancipation Proclamation and the Civil Rights Movement. America’s first hideous sin was bringing Black people from Africa to enslave them. The second was attempting to annihilate Native Americans after stealing their land.

The slogan should be “Make America Great Through Equality, Compromise and Compassion.”

The late bassist Wilbur Ware (Sept. 8, 1923-Sept. 9, 1979), who was self-taught, never had to endure the sometimes-opinionated halls of music academia. Instead, he explored the bass with the intensity of a strong abandoned breeze. His often-noted unorthodox technique was just his creative style that led to his unique percussive sound.

Nov. 13 to 15, the Wilbur Ware Institute, the nonprofit organization named in his memory, will present its annual fundraiser at Cassandra’s Jazz Club and Gallery (2256 Seventh Ave. at 133rd Street).

The weekend kicks off with the pianist Donald Smith, the bassist Juini Booth, and the guitarist Pasquale Grasso. Special guests will include the trumpeter Wallace Roney, the pianist Roberta Piret and the young drummer Kojo Odu Roney (Wallace’s nephew, and at 11 years old, he is blazing).

The Dwight Dickerson Trio will perform each night with the bassists Ron McClure and Lisle Atkinson, the drummer Greg Bandy and guests saxophonist TK Blue and trumpeter Michael C. Lewis.

For a complete listing, reservations and prices, call 347-523-9886 or visit wilburwareinstitute.org.