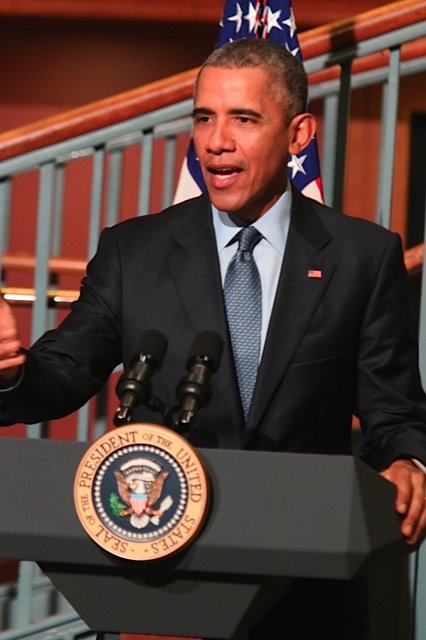 President Barack Obama traveled to Newark, N.J., this week to highlight the re-entry process of formerly incarcerated individuals who are working to put their lives back on track and earn their second chance.

The president was joined by Sen. Cory Booker and Mayor Ras Baraka and visited a residential facility, Integrity House and later convened a roundtable discussion at Rutgers University–Newark, Center for Law & Justice, where he delivered a statement.

“Right now, there are 2.2 million Americans behind bars—2.2 million,” Obama said. “We incarcerate people at a rate that is unequaled around the world. We account for 5 percent of the world’s population, 25 percent of its inmates. They are disproportionately Black and Latino.”

“So my hope is, is that with the federal government also taking action, us getting legislation passed—this becomes a basic principle across our society,” Obama said. “It is relevant to find out whether somebody has a criminal record. We’re not suggesting ignore it. What we are suggesting is, when it comes to the application, give folks a chance to get through the door.”

“I am grateful for all of the Newarkers, community stakeholders and students who joined with us to make President Obama’s visit to Newark exceptional,” he said. “His visit places Newark in the unique narrative of criminal justice reform history and the president paid our city the highest compliment by saying that Newark is helping to lead the way.”

Baraka added that crime can’t be defeated by “arresting our way out of it.” He said Obama’s reforms deal with the causes of crimes and breaks the recidivism cycle.

“We recognize that to transform Newark, we have to transform our city’s culture and the lives of our residents, particularly youth and re-entering offenders,” Baraka said. “This is why we are addressing crime and violence in Newark as a public health issue, seeing that we must inoculate and vaccinate our residents to protect them from it.”