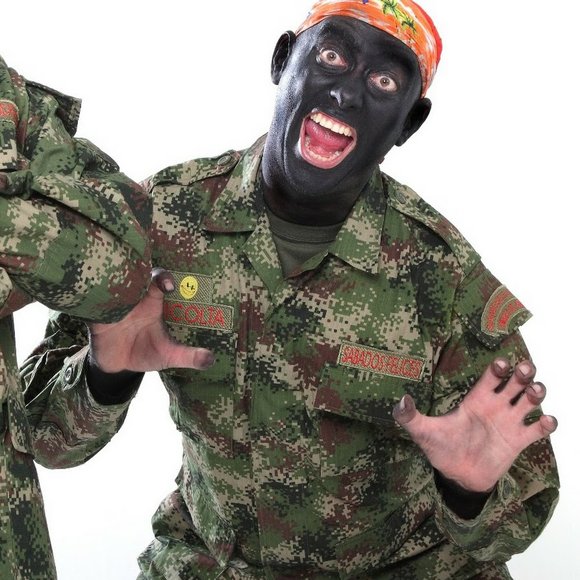 The character of Soldado Micolta (Private Micolta) is supposed to be a Black Colombian but is portrayed by a white Colombian named Roberto Lozano. For his act, Lozano wears dark makeup and walks and talks with an exaggerated accent similar to those of Blacks from Colombia’s Pacific coast. For months, activists held protest demonstrations demanding an end to the Soldado Micolta character in front of Caracol TV’s offices in the nation’s capital, Bogota. In June, the non-governmental organization Chao Racismo (Goodbye to Racism) initiated a petition to demand that the Micolta character be taken off the air.

In their petition to Caracol TV, Chao Racismo noted that having the stereotype on a national program every week is an assault on the dignity of Black Colombians. Chao Racismo also pointed out that the nation of Peru recently dealt with similar issues during its debates about the character “El Negro Mama,” portrayed by a comedian named Jorge Benavides on the weekly program “El Especial del Humor” (“The Humor Special”). El Negro Mama was characterized as your average Afro-Peruvian delinquent and cannibal. The character was seen in different scenarios and known to repeat the phrase, “Soy Negrito, pero tengo mi cerebrito” (“I am Black but I have my little brain”). Chao Racismo noted that in the case of El Negro Mama, protest petitions were made and even sent to the United Nations to have Peru sanctioned because of this offense.

Oct. 30, Chao Racismo posted a note to its Facebook page announcing that they had been informed that Lozano had agreed to no longer portray the Soldado Micolta character. “We are sure there will be some people with foolish opinions who will think that [Soldado Micolta was not hurting anyone]; it is similar to people who say that Blacks did not need to be freed from slavery, women shouldn’t vote, Colombia did not need its independence … or people of the same sex shouldn’t marry,” stated the letter, signed by Chao Racismo President Ray Charrupi. “We are not shocked by irrational arguments; we simply choose to fight them with the force of logic.”

In a somewhat related case, U.S. Rep. Henry “Hank” Johnson, who recently visited Colombia to attend a conference in Quibdo, capital of the predominantly Black state of Choco, is speaking out about his treatment by local authorities. The five-term congressman from Georgia’s 4th Congressional District had visited Choco to attend a conference organized by Consejo de Paz Afrocolombiano, an organization pushing for Black participation in the peace talks between Colombia’s government and rebel groups. But while catching a flight at the airport in Medellin, local police authorities picked him out of a crowd and demanded to see his passport. Johnson did not understand what was happening so local activist Marino Cordoba intervened to ask what the problem was.

The police said they were looking for someone who had stolen a bag, and the 61-year-old, gray-haired congressman looked to them a likely suspect. Even though Cordoba explained that Johnson was a U.S. congressman, the authorities remained aggressive in attitude, and after arguing with Cordoba, they finally left. Johnson has registered a complaint with the U.S. ambassador to Colombia and says he is speaking up about this incident because he has since heard that this happens to many Black people in Colombia.

Blacks in Colombia, Johnson told a local newspaper, are “70 years behind” in their fight for civil rights. Johnson says that after his racial profiling experience there, he plans to speak up about the difficulties Blacks experience in Colombia.