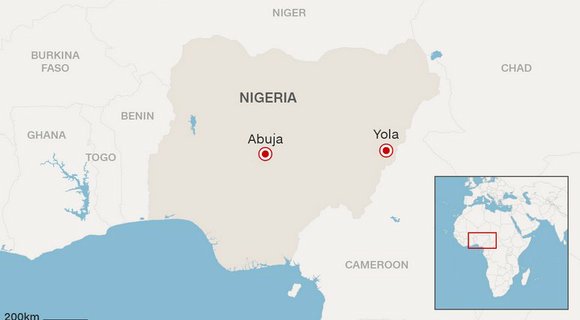 LAGOS, Nigeria (CNN) -- At least 31 people were killed and 72 others injured in a bomb blast in the northeastern Nigerian city of Yola on Tuesday evening, according to Aliyu Maikano, a local Red Cross official.

Another official from the National Emergency Management Agency (NEMA), Sa'ad Bello, gave a slightly higher toll of 32 dead and 80 injured.

The explosion ripped through the crowded Tipper Garage in the Jambutu area of the city at around 7:48 p.m. local time, ‎shortly after evening prayers, Maikano said.

This area houses a livestock market, an open-air restaurant and a mosque. The explosion happened as traders were leaving the mosque and others were eating at the restaurant.

Nigerian President Muhammadu Buhari visited Yola just five days ago to present medals to soldiers fighting Boko Haram militants, as well as a camp for people displaced by the conflict.

No one has yet claimed responsibility for the blast.