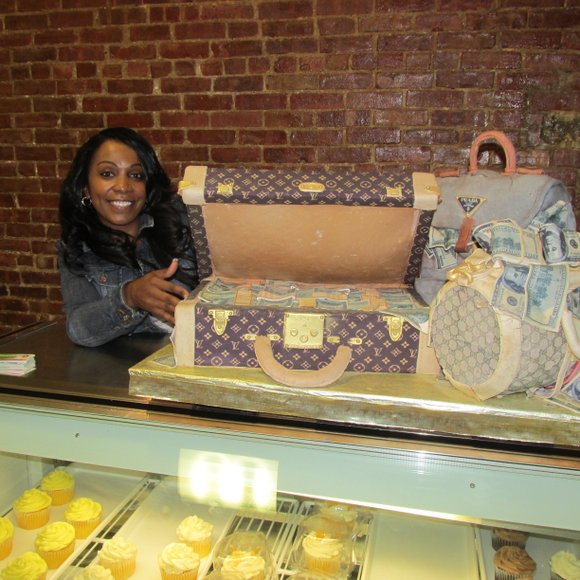 Ronnie Hernandez standing next to one of her creations. Photo by Cyril Josh Barker

If you do a double take, you might not think that one of Ronnie Hernandez’s couture cakes is real. Your eyes aren’t fooling you—every bit of her confectionary creations is 100 percent edible.

Hernandez is owner of Harlem-based bakery Batter, specializing in cakes that look like real objects. From designer purses, high-end basketball sneakers to baby bags and video game systems, Hernandez has a talent for treats.

“I am an artist and cake is my canvas,” the 48-year-old said in an interview with the AmNews. “I have a real eye for detail, and everything matters to me.”

Originally from the Bronx, the mother of four children and grandmother to four grandchildren says she’s always been crafty, first making souvenirs for baby showers. She was inspired to get into making cakes after seeing the reality show “Cake Boss” on TLC.

“I just sort of jumped out of the window with it. I love to create things, and with every cake I learn something different. It’s therapeutic for me. I get to come out of my shell and meet amazing people,” she said.

Never spending one day in culinary school, Hernandez is self-taught. She is known for the homemade buttercream fondant icing she uses. Her celebrity clients include French Montana, Wise McGriff and Mendeecees Harris.

Hernandez has had her Harlem location for the past four years, and being a business owner is in her blood. Her grandmother owned a sandwich shop in Harlem and her great-grandfather operated a produce stand in the 1930s not far from her cake shop. She says she has not been stumped yet by the requests people have made for cakes. Some of her creations can take as long as 10 hours.

Along with making couture cakes, Hernandez also specializes in wedding cakes. Her wedding cakes have gotten attention because of the many weddings she has done for LGBT couples. As same-sex marriage is taking place nationally, Hernandez said that many bakeries in New York discriminate against gay couples.

“I was surprised when I found out that the reason many same-sex couples were coming to me was because they could not find a bakery who would make a cake for them,” she said. “It’s hard for gay couples to find a place to bake their cake, and once they adopt you, they tell other people about what you are doing.”

Before getting into cake making, Hernandez was an elementary school teacher for nearly a decade and holds a masters degree. Today she uses her business and passion to mold the next generation of culinary giants. Hernandez hires local high school students as interns to help out around her shop. She currently has four students who are studying culinary skills and are working for her for school credit. The interns’ duties include frosting cupcakes, coloring fondant and helping prep and clean up the kitchen. Many of the students she works with are aspiring pastry chefs or want to get into the baking business.

“Having kids come in here takes me back to when I was teaching,” said Hernandez. “The girls who work for me are amazed at what goes on in here.”

As for the future, Hernandez said she would love to have a TV show and wants to set up her shop to have an outdoor space.