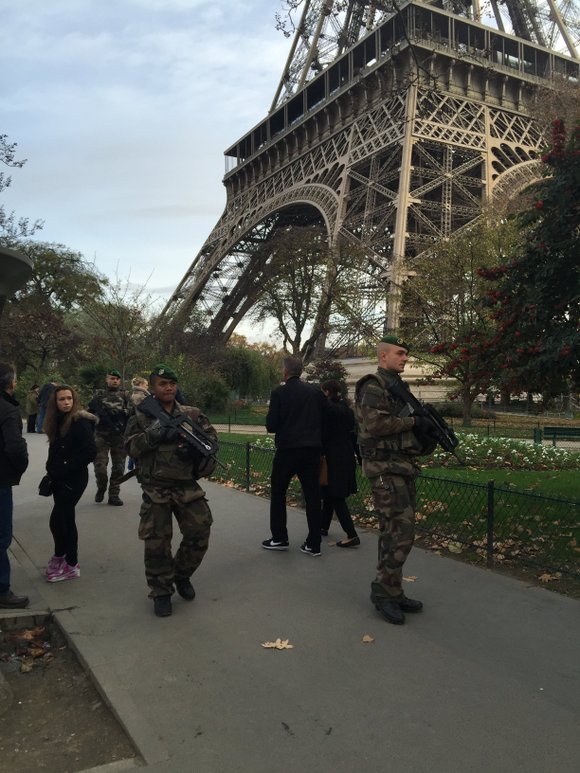 Tourists talk to armed police as french soldiers in camouflage carrying automatic rifles patrol nearby in squads of 3. Several units of soldiers here plus many police vans and an emergencies bus CNN/Nic Robertson

Last week’s deadly attacks in the French capital of Paris, which claimed the lives of nearly 130 people, appears to have forced a quiet but renewed focus by Caribbean governments on international terrorism and the issue of young men from the region traveling to battle grounds to fight alongside extremists.

Authorities in Trinidad, which has had more than its fare share of problems with radical Islam in the past 40 years, are keeping a close eye on events as nearly 100 young Trinidadians have left island shores in the past two years to join the war against the West and its forces. But even as the region tries to lie low while avoiding unwarranted attention, the country’s new national security minister raised eyebrows in the past week after he said that citizens who had joined “the struggle” are free to return home without fear of penalty.

The issue has not gone down that well with some in the oil- and gas-rich republic just north of Venezuela. Reginald Dumas, the former head of the island’s public service and a retired diplomat, suggested to the Express newspaper that authorities must pay keen attention to returning fighters, as the country had co-sponsored U.N. Resolution 2178 in September 2014, dealing with the “recruiting, transporting or equipping individuals who travel to a state other than their states of residence to plan or participate in terrorist acts. “What happens next?” he asked.

The country is particularly sensitive to radical Muslim elements. In July 1990, a group of 114 militants tried to topple the elected government of Prime Minister Ray Robinson, storming the parliament, state television station and other facilities in a row over economic policies and the island’s treatment of the poor. Robinson was shot in the leg. More than 20 people were killed, the country was completely shut down for about a week and large parts of commercial Port of Spain, the capital, were burned and looted.

The rebels were pardoned by a court on a technicality but are not shy to every now and then threaten further mayhem—a fact not lost on President Anthony Carmona in a weekend speech to diplomats.

“An attack on France and its democracy is an attack on all of us. These premeditated acts of extremism have no place in France or any progressive society, principled on inclusivity, tolerance, diplomacy and non-violence.”

Latest figures released by security authorities on the weekend indicate that there are now 89 Trinidadian nationals who have left to fight in Syria or Iraq, according to The Guardian newspaper. Officials say the latest developments will now force them to liaise with the international community regarding returnees and later to update laws in this area.