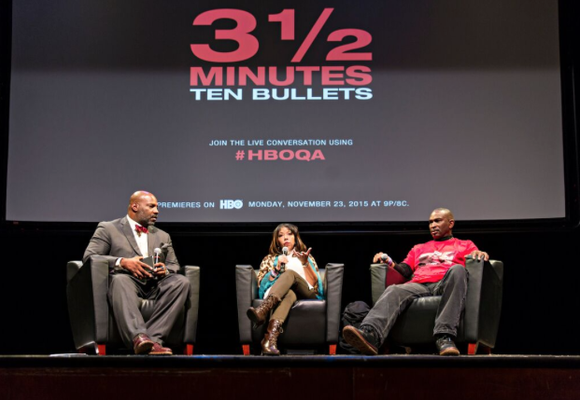 On Wednesday night, HBO hosted an invite-only screening of the documentary 3 1/2 Minutes, Ten Bullets at the Schomburg Center in Harlem.

The film probes the case of Jordan Davis, a black teenager, and Michael Dunn, a middle-aged white man, whose encounter over loud music outside a convenience store ended in the young man’s death.

The screening was accompanied by a Q&A discussion with Davis’ parents Lucy McBath and Ron Davis, moderated by University of Connecticut professor and staff writer for The New Yorker, Dr. Jelanie Cobb. During the conversation, Davis and McBath spoke about their experiences during the trial process and how their unimaginable loss led them to inspire change and hope through activism. In addition to the screening and discussion, Joshua Bennett of the New York-base poetry collective The Strivers Row, performed a special spoken-word poem dedicated to Jordan Davis.

Guests gathered inside the Schomburg Center’s Langston Hughes Auditorium for a cocktail hour and the signing of the interactive “My Life Matters Because” Art Wall – where attendees could share why their life matters.

The private screening precedes the debut of the film on November 23rd, the three-year anniversary of tragic shooting.