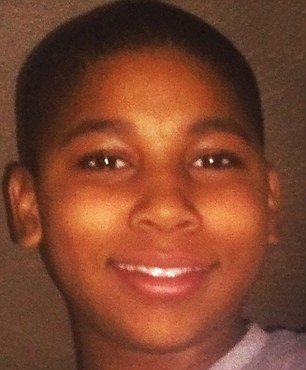 A 13-page report released last Thursday by the Cuyahoga County Prosecutor’s Office determined that 12-year-old Tamir Rice’s murder by a Caucasian Cleveland cop one year ago was “objectively reasonable,” according to law enforcement consultant Ken Katsaris, an expert on police use of force.

“This unquestionably was a tragic loss of life, but to compound the tragedy by labeling the officer’s conduct as anything but objectively reasonable would also be a tragedy,” Katsaris wrote, “albeit not carrying with it the consequences of the loss of life, only the possibility of loss of career.”

New surveillance video, from a previously unseen angle, was also released last Thursday by prosecutor Timothy J. McGinty’s office. The footage from Nov. 22, 2014, shows officer Frank Garmback, who didn’t shoot, pulling his patrol car up to where young Rice is standing in a playground. Within two seconds, his rookie partner-in-training, Timothy Loehmann, 26, jumps out the passenger side and without warning shoots the 12-year-old child, who perished the following day.

Authorities initially said Loehmann yelled three times at Rice to raise his hands, yet the video refutes this claim.

The cops were responding to a 911 call reporting that there was “a guy with a pistol … he keeps pulling it in and out of his pants, and pointing it at people.” What the dispatcher did not convey to them was that the weapon was “probably fake” and that “he’s probably a juvenile.”

Katsaris said the situation “provided only one split second choice for Loehmann under what is clearly a tense and rapidly evolving situation that required the application of deadly force to protect both, or either, of the officers. This decision, in my opinion, was clearly objectively reasonable, given the totality of the circumstances.”

McGinty called the report and the video “pieces of a complex puzzle that are part of an ongoing investigation.” He didn’t specify when the grand jury action will conclude.

“There can be no doubt that Rice’s death was tragic and, indeed, when one considers his age, heartbreaking,” Colorado prosecutor Lamar Sims wrote. He added, “Officer Loehmann’s belief that Rice posed a threat of serious physical harm or death was objectively reasonable, as was his response to that perceived threat.”

Retired FBI special agent Kimberly A. Crawford wrote in her report, “The question is not whether every officer would have reacted the same way. Rather, the relevant inquiry is whether a reasonable officer, confronting the exact same scenario under identical conditions, could have concluded that deadly force was necessary.” She suggested that Loehmann did not know Rice’s gun was fake.

Katsaris wrote, “Given the notice of the police presence to Rice, and the specific threatening actions of Rice toward the reported gun location area on his body, Rice’s actions provided no other alternative to officer Loehmann than to apply deadly force.”

A Rice family lawyer was skeptical the case will be fairly presented to the grand jury and requested a special prosecutor to take over, suggesting the county prosecutor is biased in favor of cops.

“Regrettably, with the release of yet another utterly biased and shamelessly misguided ‘expert report,’ the county prosecutor is making clear his intention to protect the police from accountability under the criminal laws, rather than diligently prosecute them,” attorney Jonathan Abady said in a statement Thursday.

The boy’s mother, Samaria Rice, has a federal lawsuit pending against Cleveland and the two cops.

Abady concluded, “We now have grave concerns that there will be no criminal prosecution. Prosecutors exercise substantial influence over the grand jury process and whether an indictment will be issued. The video footage and other evidence readily available from the outset made clear that this was a completely unreasonable use of deadly force against Tamir.”

To view the video, visit www.youtube.com/watch?v=qHuVrimyHgg.