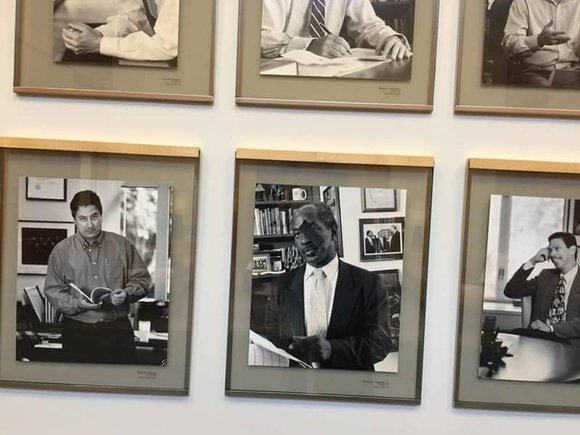 African-American Harvard professors' photographs were defaced in an incident being investigated as a hate crime. Courtesy A.J. Clayborne

(CNN) -- Harvard University police are investigating a possible hate crime at the law school after someone covered portraits of black faculty members in tape, according to university officials.

Some photographs, housed in Wasserstein Hall on the Cambridge, Massachusetts, campus, were defaced with strips of black tape and discovered Thursday morning. No suspect had been identified, according to Michelle Deakin, a spokeswoman at Harvard Law School.

According to an article on Harvard's website, the portraits are a part of a long-standing tradition at the school with roots in the 1800s. More than 180 faculty members from throughout the law school's history are on display. Only black professors had their faces covered in tape.

Harvard Law School students quickly rallied in solidarity with their professors. A.J. Clayborne, who will graduate in 2016, told CNN that the response on campus was "fairly overwhelming" and that students "are shocked." He said that students met to organize in light of the incident.

"Speaking as a student of color, I know that while I am hurt and saddened, I am not surprised," Clayborne told CNN in an email. "This is merely a symptom of the greater systemic racism that currently permeates this law school and legal institutions in general."

Professors targeted in the incident were grateful for the support of the students.

"There has been an outpouring of warm wishes for the affected faculty from Harvard Law students, some of whom posted signed messages of support," said Dr. Tomiko Brown-Nagin, a professor of constitutional law at the school, in a statement to CNN. "I am so proud of the students for reacting with love and kindness, for showing leadership, and for valuing inclusion."

According to Clayborne, Harvard undergraduate students organized a rally with Tufts University students on Wednesday in solidarity with students at University of Missouri and at Yale University, which have seen major race-related incidents in recent weeks. Students gave speeches, sang songs, and marched from the Harvard campus to Porter Square.

"I was shocked to see portraits of black faculty members defaced today in an apparent response to the peaceful protest organized by Harvard's black students on yesterday," said Dr. Ronald Sullivan Jr., who is the director of the Harvard Criminal Justice Institute. "My shock and dismay, however, were replaced with joy and admiration when I saw the lovely notes of affirmation and appreciation that Harvard law students placed on our portraits."

Students met with law school Dean Martha Minow, who said university police were investigating the incident as a hate crime. Another community forum was scheduled for November 30, according to emails sent to students on Thursday.

"Expressions of hatred are abhorrent, whether they be directed at race, sex, sexual preference, gender identity, religion, or any other targets of bigotry," Minow said in a statement.