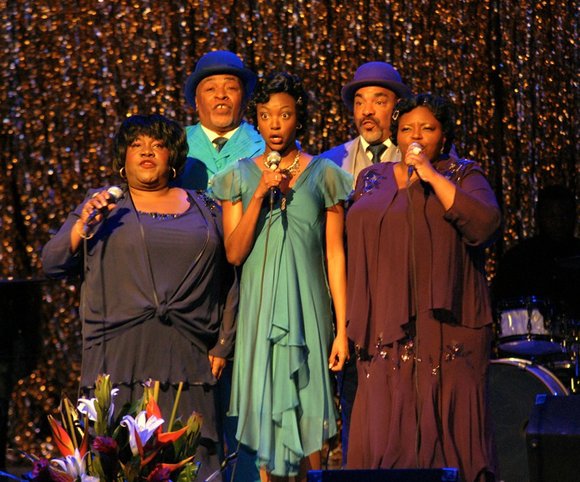 Last Monday, Symphony Space was the place to be for members of the Black theater family. It was a time to enjoy being around those who have a shared passion and admiration for what we bring to a stage. It was the 43rd annual AUDELCO Awards for recognition of excellence in Black theater. The event was hosted by the charming Kenny Seymour and the amazing Alyson Williams. Williams, though best known for her fabulous singing voice, proved to be quite humorous throughout the event. There was just a feeling of being relaxed and seeing your friends and theater family come out and acknowledge them for their love and dedication to their craft.

Celebrities filled the audience, including Eboni JoAnn, Cheryl Lee Ralph, Anthony Chisholm and many others. It was a who’s who of Black theater, and there was a lot of love in the room. The audience was treated to samples of what we had experienced during the theatrical season as performances were done by the cast of “Ain’t Misbehavin’”—who did a medley of numbers from the productions; Anthony Wayne, who dressed in a white suit, high red pumps and red lip stick, performed songs from “Mighty Real: The Fabulous Sylvester Musical,” and there was a performance of “Destruction” from the musical “Flambeaux.” Other singing performances came from Sandra Reaves-Phillips, and let me tell you, this lady—there to receive a Pioneer Award—definitely still has the pipes. She sang a song she created that inspires her, and she ended the awards by leading the audience in “Lean On Me.” Her vocal instrument is amazing!

The words, “and the VIV goes to,” followed by a drum roll, were exciting words to hear throughout the evening and the winners were elated. The award is named the VIV after AUDELCO’s late co-founder Vivian Robinson.

“Flambeaux,” presented by the Obsidian Media Group and Braata Productions, was the top winner of the night. It won six VIVs, including Musical Production of the Year; Best Director/Musical Production—Lawrence Floyd; Musical Director—Jeff Bolding; Best Choreography—Juson Williams; Outstanding Performance in a Musical/Male—J. Bernard Calloway and Outstanding Performance in a Musical/Female—Althea Alexis. Floyd explained, “‘Flambeaux’ was the little play that could.” All the award winners thanked the creative team behind the production.

“Our Lady of Kiebho” took the VIV on the dramatic side of the spectrum. It received Dramatic Production of the Year. Playwright Katori Hall won Outstanding Playwright; Matt Tierney won Sound Design and Emily Rebholz received Costume Design. Hall was humble as she expressed that whenever she comes to the AUDELCOs, she “gets bowled over that this is a family.” She thanked the director, actors, Signature Theater and the woman in the village of Kibeho, who shared this story with her.

“Ain’t Misbehavin’” from Irving Street Rep/Faison Firehouse and “Fences” from the Morningside Players received the VIV in a tie for Best Revival. Best Solo Performance was won by Keith Hamilton Cobb for his performance in “American Moor,” from Phoenix Theater Ensemble. S. Epatha Merkerson of “While I Yet Live” presented by Primary Stages won Best Lead Actress. John Douglas Thompson won Best Lead Actor for his role in “Tamburlaine, Part I and II” from Theater for a New Audience.

Supporting Actress and Actor VIVs went to the powerful Billie Holiday production of “Brothers From the Bottom” and was won by Toccarra Cash and Kevin Mambo. The honor of Director of a Dramatic Production was bestowed upon Jo Bonney for his work with the Public Theater’s play “Father Comes Home From the Wars, Part I, II and III.”

Alongside these theater professionals receiving their VIVs, the evening was filled with other recognition awards and it was touching to experience. Khadim Diop—who began his acting career with IMPACT Repertory Theater Productions and has been in short films and off-Broadway productions, including “Seed”, “Children of Killers” by Katori Hall and “In the Wine Time” at the HADLEY Players—was named the Rising Star.

The Outstanding Pioneer Award was given to three honorees: actor, dancer, teacher, choreographer, director, author and theater activist Bernard J. Marsh; singer, actress of stage and screen and multiple award winner Sandra Reaves-Phillip; and Rudolph Shaw, executive director of Caribbean American Repertory Theater, which has built relationships with other theater companies and brings productions to national and international stages. A Special Achievement Award went to BAYO, a production stage manager who is in demand, and Les Ford’s Nia Productions, a company that develops arts-in-education programs to promote arts education in schools in under served communities.

Board of Directors Awards were given to executive producer Darlene Gidney; Toni Peterson, AUDELCO patron of 15 years and second vice president of AUDELCO; and actor-director Leon Pinkney.

Jones talked to the audience about the organization and thanked one of the original members, Mary B, for her continued hard work. Black theater is a cause that needs to be supported throughout the year, please look into AUDELCO and see how you can become a member and keep Black theater alive. It tells our stories as only we can.