Trump the epitome of asininity 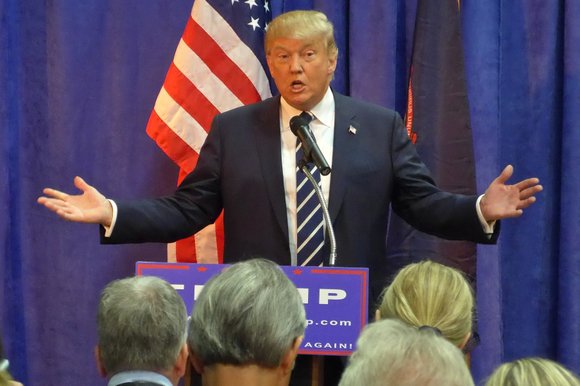 Donald Trump speaks to the media at a Lincoln Day event sponsored by the Republican parties of Genesee and Saginaw counties, MI. William Walker/CNN

Each time we think that Republican presidential contender Donald Trump has exhausted his asinine statements, he retrieves another. It’s hard to believe he can top his most recent comments on the Syrian refugee problems or the terrorist attacks that are rocking the world.

Last Saturday, during a rally in Birmingham, Ala., Trump told a crowd that he had witnessed thousands of people in Jersey City, N.J., cheering while the World Trade Center crumbled during 9/11. “Thousands of people were cheering,” he said. “So something’s going on. We’ve got to find out what it is.”

Yes, something is certainly going on in Trump’s memory or imagination—both of which appear to be terribly flawed and discombobulated. But maybe the man is just an inveterate prevaricator, one who just can’t help lying or, as he might say, embellishing a truth.

Moreover, he told his cheering throng in Birmingham that if he were president, he would order “surveillance of certain mosques” in the nation to combat terrorism. A week before, he characterized the wave of refugees as a possible “Trojan horse,” invoking a subterfuge the Greeks used to defeat the Trojans.

Beyond his intemperate and caustic comments was his comment about a Black man who was forcibly removed during the rally in Alabama. He said the man, wearing a Black Lives Matter T-shirt, deserved to be manhandled for interrupting his speech.

Even more disturbing than Trump’s absurdity and his ability to stir controversy and attract the media is the extent to which he continues to appeal to a certain constituency in the nation. Recent polls show a 10 percent increase in his lead over all the other top four contenders, including Dr. Ben Carson.

For most of this political season, pundits have concluded that his popularity had much to do with his outsider, anti-establishment stance, thus a short wave of enthusiasm that would soon fade. But each time there’s an indication that he is about to disappear, he rebounds, and the recent rise of terrorism apparently has given him yet another resurgence.

At the beginning of his campaign, immigration was his chief calling card, including the plan to build a wall to keep immigrants from entering the country. That was an idea that grew from his concern about the Mexican borders. Now, the refugee crisis, particularly the report that one of the terrorists in Paris had entered the country as a refugee, provides him with fresh fodder.

Of course, Trump doesn’t need any social or political developments to announce an inflammatory remark or arrive at another plateau of despicability. All he has to do is watch television, where he gathers his understanding of foreign policy, or resort to an imagination that gets more fervid, bizarre and incomprehensible by the hour.