Man charged with murder in 'assassination' of Tyshawn Lee, 9 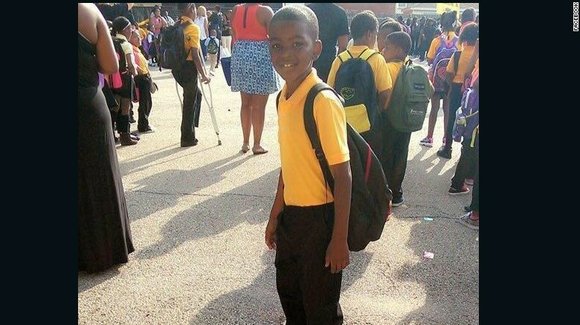 (CNN) -- Four weeks after alleged gang members lured 9-year-old Tyshawn Lee into an alley and killed him -- a slaying that some in violence-riddled Chicago called a new low -- the city's police superintendent announced the arrest of one man Friday and vowed to "obliterate" the "criminal" group he belonged to.

"That gang just signed its own death warrant," Superintendent Garry McCarthy said. "We're going to go in and destroy that gang and, by the way, the rival gang, too."

McCarthy said Corey Morgan, a 27-year-old "documented gang member (and) convicted felon," is in custody on a first-degree murder charge. But police don't think Morgan was alone, saying he acted "in concert" with two others. McCarthy didn't name one, who is in custody on an unrelated charge; the other, Kevin Edwards, is at large.

"Who drove the car, who was on the scene, who pulled the trigger is all being worked on to delineate it," the superintendent said. "But we do know that these were the individuals who were involved in this."

The afternoon of November 2, officials say, men approached young Tyshawn as he played basketball with friends at a Chicago playground. They led him to an alley and, with a single gun, shot the boy.

The shooting was "targeted and calculated," McCarthy said. He connected it to Tyshawn's father, who the superintendent said hasn't helped police "at all" in the case, and at least two other fatal shootings over the previous months.

"This is a crime that shook our city," the superintendent said. "It was an act of barbarism, the assassination of a 9-year-old child as a gang retaliation to get back at his father.

"Tyshawn Lee was failed on many, many levels."

Shooting deaths on the streets of Chicago, sadly, are nothing new.

In 2012, the city gained the dubious distinction of murder capital of the United States after it registered 503 homicides, more than any other city. Those numbers have ticked down some, though the FBI's 2014 statistics show 411 killings, still outpacing cities (such as New York with 333 and Los Angeles with 260) with higher populations.

Some areas of the city are worse than others. They include Auburn-Gresham, a neighborhood on the South Side where gangs battle over turf and the right to sell drugs. That's where Tyshawn was shot dead, down the street from his grandmother's house, the Rev. Michael Pfleger said at the child's funeral.

Investigators don't know whether any of the men involved in his death knew the 9-year-old personally. But they do believe that he was singled out, not for anything he did but because of his father.

"It's truly an act of barbarism," Chicago police Chief of Detectives Dean Andrews said Friday. "It's a 9-year-old boy that was targeted and executed."

Even given the city's recent history, Tyshawn's shooting was considered beyond the pale.

"A baby was executed," said Pfleger, a Catholic priest and local faith leader. "A baby was assassinated right behind us in the alley."

One longtime resident, Deronce Curd, had trouble coming to grips with the idea of gangs going after children.

"How can a little boy, 9 years old, defend himself?" Curd asked. "I'm speechless to what is going on right now."

Authorities say one concern was the "code of silence": citizens' unwillingness to trust, and talk to, police. That's partly tied to tensions among law enforcement and African-Americans in Chicago, a situation that's come to the fore this week with protests over a video showing a white officer fatally shooting black teen Laquan McDonald in 2014.

That wasn't the case surrounding Tyshawn's shooting, however, with McCarthy lauding those who did come forward to help with the case.

"This was very clearly not a case of no snitching, but there was a lot of fear, which is completely understandable," the superintendent said. "If you have a monster who is willing to assassinate a 9-year-old, what is that person likely to do if they know that somebody is cooperating with the case?"

Though police are confident that they know who was involved in Tyshawn's death, they still have work to do.

McCarthy expressed confidence that the unnamed man in custody won't be released anytime soon and that authorities will find Edwards, whom they've been hunting for weeks.

"He's turned his back on his family (and) basically burned bridges in the community with everybody," the superintendent said of Edwards, who he alleged is a "criminal" like the other two suspects. "We're definitely going to catch him; it's just a matter of when."

Going after the gang all three men were involved with, as well as the one they've been feuding with, is another priority for Chicago police.

"We're going to assign resources," McCarthy said, "to ensure that neither one of those gangs can raise (their) head again."

CNN's Tina Burnside and Dana Ford contributed to this report.