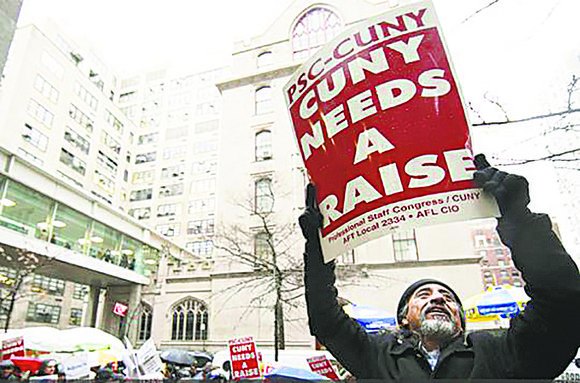 With so many unions awarded contracts since Mayor Bill de Blasio took office, many New Yorkers have forgotten about CUNY’s faculty and staff.

Thursday morning, members of the Professional Staff Congress/CUNY, the union that represents the City University of New York’s faculty and staff, protested outside of CUNY Chancellor James B. Milliken’s home on the East Side of Manhattan. Workers have chosen to protest outside of his home early in the morning because, according to the PSC-CUNY, Milliken hasn’t “woken up” to the crisis involving academic quality at CUNY schools.

CUNY’s faculty and staff have been working without a contract for five years and haven’t received a raise in six years. Union members say that CUNY’s academic departments have struggled to recruit and retain faculty, with professors and advisers less able to give students the proper attention. Meanwhile, tuition has gone up every year.

Workers, along with some student activists, want Milliken to deliver what they call a fair economic offer and allow implementation of their contract.

The AmNews spoke with Delores Jones-Brown, professor of law, political science and criminal justice at the John Jay College of Criminal Justice and the founding director of that school’s Center on Race, Crime and Justice. She related her experience at attempting to do more with less.

“We have a number of people who didn’t come up through the age and era of resistance, so many of them are just happy to have a job,” said Brown. “So we have experienced a significant amount of attrition.”

“We’ve been trying to recruit a permanent director since 2005,” Brown said about the Center on Race. Crime and Justice. “We’ve had several really promising candidates, but we couldn’t promise them the kind of salaries and benefits that the institution they came from had or the institution they eventually went to.”

Alexios P. Polychronakos, professor and chair of the Physics Department at City College and professor at the CUNY Graduate Center, echoed Brown’s sentiments on how “demoralizing” it is to try and maintain staff.

“We feel like second-class citizens,” Polychronakos told the AmNews. “Recruiting and maintaining the people has been difficult because we offer a salary that’s, frankly, not competitive.”

Polychronakos said that they try to entice new recruits by saying that they’re in the middle of negotiations and things will be better soon, but many are gone within the first three years once they realize salaries aren’t changing.

“We can speculate all we want, but we do not see any clear signs from anywhere that something dramatic is gonna happen,” said Polychronakos. “We hope for a fair contract that takes into account the cost of living and fair raises. That’s the least we should hope for because that’s common sense.”